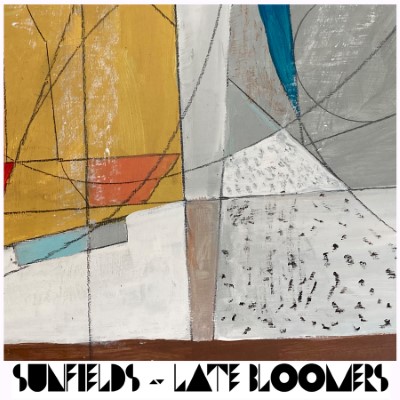 Late Bloomers is the fourth album to come from the Montreal-based quartet Sunfields. Drawing inspiration from artists such as Neil Young and Tom Petty, this album takes those influences and puts them through the lens of a classic 70’s glam band such as the sweet, T-rex, and adds a hint of David Bowie.

The first track that stood out to me was “Don’t Belong” with a driving rhythm reminiscent of “I Won’t Back Down” by Tom Petty. The other stand out was “Boy”, with the feel of a first-time acid trip that was a positive trip to cloud 9. This album is another classic example of a cottage album. The type of album, where you get your two weeks off work and take a road trip to your happy place or just sit up on your deck or in the hot tub with a few drinks, taking in the relaxing sounds that are present in “Song for a Honeycomb”.

Overall,  this album is a scorcher from beginning to end. There was not a bad song on this release and it will have repeat listens, as well as it will be added to my full album playlist. I would definitely recommend this album, so what are you waiting for?