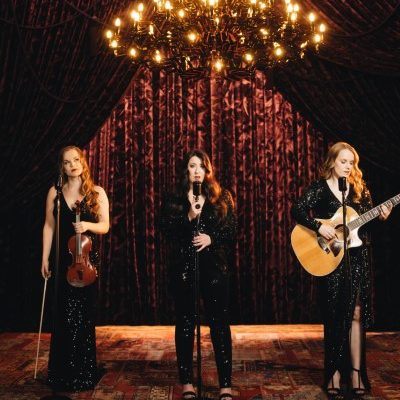 Twin Kennedy and Mallory Johnson collaborated on their latest release “Wise Woman”. Surrounded by patio lights and a bottle of wine, the twins reunited with their longtime friend for a co-writing session. Inspired by their shared struggles as women in a male-dominated industry, “Wise Woman” was born.

The country song was recorded in Nashville with Canadian producer Dustin Olyan (David Lee Murphy, Angaleena Presley) and co-produced with Carli and Julie Kennedy, and Mallory Johnson themselves. Gathering some of Nashville’s most prominent session players, the track also features Steve Hinson (George Jones, Randy Travis), Tim Marks (Taylor Swift, Luke Combs), and Jeff Adamczyk (Midland). The release is the third single off Twin Kennedy’s upcoming album Homebound, following its first two releases “Blindspot” and “Call It Love” which have marked a new era for the sisters and their music. Mallory Johnson is currently in the studio with Grammy-nominated producer Kent Wells (Dolly Parton) working on her upcoming album that will also include a version of “Wise Woman”.

Likewise, Mallory Johnson has been turning heads in the country music scene, sharing stages with artists like Carolyn Dawn Johnson, Rascal Flatts, and Blake Shelton to name a few. Her self-titled EP earned her the 2019 ECMA for Country Recording of the Year and 3 Music NL nominations for Country Artist, Rising Star, and Female Artist of the Year. One of her later songs “Drunk Mind, Sober Heart”, off the digital 45 project Double Shot was a finalist in the 2019 International Songwriting Competition and nominated for Best Country Song at the 18th Annual Independent Music Awards. The project itself earned Mallory nominations for Fan’s Choice Entertainer and SOCAN Songwriter of the Year at the 2020 Music NL Awards.

Here’s what the women behind “Wise Woman” had to say about the new release:

How long have you known each other? Did that have an impact on your co-writing session?

M: I’ve known Carli and Julie for about 5 or 6 years now. A mutual friend of ours heard I was making a writing trip to Nashville and she told me that I should reach out to Twin Kennedy for a session. I connected with them over email and the rest is history! We’ve been really close friends ever since and I’ve written some of my favourite songs with them!

I think our friendship definitely influenced the session for “Wise Woman” mostly because we knew we were in a safe space. The song demanded vulnerability and honesty and if we couldn’t do that, then it wouldn’t have come across as genuine, and it would have lacked the impact we were hoping to achieve. We knew this subject matter was important and we wanted to do it justice and create a girl-power anthem.

What made you want to write a song about female empowerment that night?

M: When I arrived at Carli and Julie’s place that night, I had high hopes but low expectations about writing a song, simply because we’re great friends and the night could have easily swayed to a classic girls night rather than a songwriting session! However, Carli pulled out her guitar and sang a verse she had written for a song titled “Wise Woman”. I felt like I had the wind knocked out of me and I immediately knew I wanted to be in the room when that song was finished. It’s a song about our shared challenges, insecurities, and lessons of being a female in a male-dominated industry. It was an empowering and therapeutic session for all of us.

What does the song mean to you?

TK: To us, the song is about speaking our truths and sharing the lessons we’ve learned so far in life. Speaking openly about what we go through as women in this industry isn’t easy – from a young age, we are sent so many messages as women to not speak up too loud or cause a scene, to take care of everyone else, and listen to everyone else’s opinion. What we’ve learned is that our own opinions and feelings matter just as much – and trusting your gut and your own intuition is so important. We hope that women listen to the song and feel empowered to speak up for themselves and let their voices be heard. As the chorus says “If I knew then what I know now – I wouldn’t stand there in that line, I’d be standing out.” We are worthy of sitting at the head of the table too!

What was it like collaborating with so many household names in country music to record the track?

TK: We had a dream team on this track! We co-produced the song with our friend and amazing producer Dustin Olyan, and had some A-list musicians on the session, including Steve Hinson (George Jones), Tim Marks (Taylor Swift), and Jeff Adamczyk (Midland). It was a truly special recording session.

MJ: We knew that working with Dustin would inevitably mean we’d have some pretty notable and talented musicians adding their sparkle to this track. Dustin really believed in this song and the message and we knew it was in good hands. One of my favourite parts of this recording process was that Carli played the acoustic guitar and Julie arranged and played the strings. It was important for us to really showcase women in every creative corner of this song. That being said, Julie and Carli didn’t play on this track because they’re women, but because they were the best ones for the job.

Twin Kennedy, what can fans expect from the upcoming album Homebound?

TK: We are SO excited to share this new project with you all! We have spent the last couple of years in Nashville writing for this album, and it is a collection of music that tells the stories of this time in our lives. We’ve both fallen in love with Nashville fellas since moving to Tennessee, so you’ll get quite a few love songs inspired by our sweethearts, and we also spent a lot of time on the road before the pandemic, which inspired the theme of always being Homebound in our hearts. We’re so proud of this project, and “Wise Woman” is a special part of it!

Mallory, any plans for new music this year?

MJ: Sure do! I’m currently in the studio right now working on a new album with Kent Wells (Dolly Parton). I can’t wait for everyone to hear it! I’ve got a few songs on there I’ve written with Carli and Julie including an acoustic version of “Wise Woman”!

Anything else happening in 2021?

TK: We are celebrating Women’s History Month with Wise Woman – The Show! We are thrilled to be hosting this show presented by the Consulate General of Canada to the Southeast United States. It features some of our favourite women in country music and you will not only get to hear their incredible songs but also their inspiring words of wisdom for women around the world. Stay tuned for this show, premiering on March 26th at 7 pm ET!