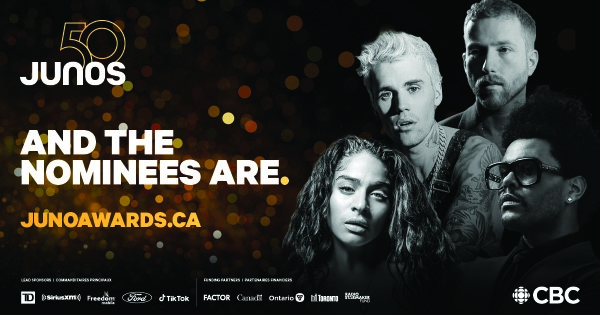 The global COVID-19 pandemic might have scuttled most plans of a grand golden anniversary celebration in Toronto, but with the announcement of the 2021 nominees, the JUNO Awards are pressing on with a nationwide tribute to the 50 year anniversary of the awards, as well as the legendary stages across the country.

Although Toronto was initially announced as the host of the 2021 JUNO Awards and will still act as the host of the May 16 award presentations, it was announced during a streamed press conference that this year’s performances will be streamed from legendary venues and stages across Canada; a move that will no doubt double as a tribute to these local performance spaces that have been important to the development of Canada’s best throughout the years as they continue to weather the effects of COVID-19 restrictions.

As for the nominees themselves, global phenomenon, the Weeknd, leads the pack with a total of six nominations, including JUNO Fan Choice, Single of the Year, Album of the Year, Artist of the Year, Songwriter of the Year and Contemporary R&B Recording of the Year; while R&B sensation, Jessie Reyez, celebrated singer-songwriter, JP Saxe, and pop superstar, Justin Bieber were nominated for five each.  Coming out with three nominations each was Ali Gatie, Celine Dion, Curtis Waters and Lennon Stella.

After the cancellation of last year’s celebrations in Saskatoon, it was announced today that the JUNO Awards will carry over the induction of Jann Arden into the Canadian Music Hall of Fame, and due to the special circumstances that will see performances from across the country, Arden’s induction takes place at the National Music Centre in the singer’s hometown of Calgary.  In addition, the presentation of the Walt Grealis Special Achievement Award was also carried forward from 2020; making famed Rush manager, Pegi Cecconi, the 2021 recipient of the honour awarded to music industry leaders.

In addition to the main JUNO nominations, voting is now open for the JUNO Fan Choice Award.  Presented for the first time by Freedom Mobile, fans are invited to vote for their favourite artist on TikTok via the official JUNO Awards TikTok account, or by visiting junofanchoice.ca.

The 2021 JUNO Awards will be broadcast nationwide Sunday, May 16  at 8 pm ET/5 pm PT on CBC TV, CBC Gem, CBC Radio One, CBC Music and globally on CBCMusic.ca/junos.