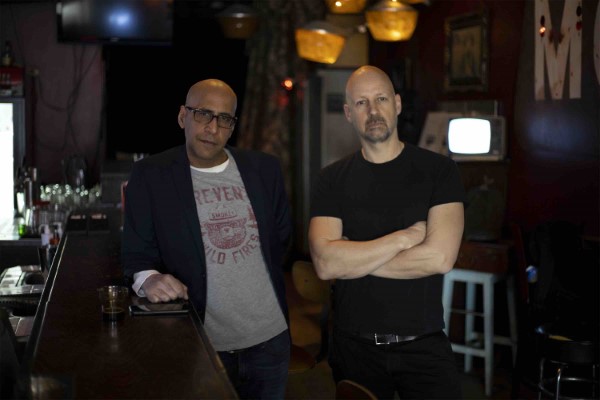 Serlin Greaves (the aptly-named duo of Joey Serlin and Daniel Greaves of The Watchmen) solidify their reunion with a new track. “Teenage Heart” marks the first single from their forthcoming album, Sad Songs For Sale, out May 28. The song arrives in a timely fashion as the world navigates online connection more than ever, reflecting on how youth live, learn and grow in a digital age, and the emotions and experiences that arise in these collective spaces.

“It’s hard to watch kids growing up today in a social media age. They put themselves out there to be scrutinized and judged, and the world can be cruel. I often wish that my kids could grow up the way I did, with friendships made through time spent together and connecting with kindred spirits. If you ever came across negativity, you could disconnect and move on. You weren’t trapped by technology. Teenage Heart speaks to this. This song encourages teenagers not to succumb to this negative conformity and to cut loose the dead weight. Live life to the fullest, while being true to yourself.”

Some things were just meant to last. That can certainly be said of the friendship between Joey Serlin and Daniel Greaves, who have been making music together for over 30 years. The Winnipeg natives rose to prominence during the indie-rock revolution of the early 1990s as guitarist and lead vocalist, respectively, of The Watchmen, a band that would go on to become one of the most successful and beloved Canadian acts of the decade, earning two JUNO nominations, along with one Platinum and three Gold-certified albums.

But as life’s other demands eventually shifted their focus away from The Watchmen, Joey and Daniel found themselves starting new families, new businesses and new musical projects on their own. That didn’t mean The Watchmen were ever finished; the band has periodically reunited to play their classic material for special events and occasions. Creating new music was a different story though, as the process gradually became more personal for each of them. Still, over the past couple of years their unshakable bond inevitably led Joey and Daniel to realize that working together again would be the most effective way to share this chapter of their lives.

The fruits of that renewed collaboration are contained on Sad Songs For Sale, their first album as Serlin Greaves, and a collection that reveals many new facets of the pair’s musical personalities. As Daniel says:

“Given how long Joey and I have worked together, it stands to reason that this record sounds like us. But when everything began telling us the timing was right, this became a real passion project where we could try some different approaches and see how things unfolded without any pressure at all.”

After refining most of Sad Songs For Sale during writing sessions at Motel Bar, the watering hole Daniel owns in Toronto’s Parkdale neighbourhood, work shifted to Joey’s Vapor Music studios, where Ryan Chalmers took on recording and drumming duties, and Dustin Anstey contributed on bass. For Joey, it was the ideal situation of being able to cut tracks completely on their own terms.

“I hadn’t written songs for quite a while, so when I started coming up with some ideas I liked, it was natural for me to imagine Danny singing them,” he says. “Fortunately, he thought they were some of the best songs I’d ever written, and that motivated him to show me some great songs he had. I think both of us felt like we didn’t have anything to say for so long, and then all of a sudden this music just started pouring out.”

To have a relationship that has lasted as long as Joey and Daniel’s is special in and of itself. But to also have that relationship still able to create powerful music after three decades puts them in rarefied company. In that sense, Serlin Greaves’ Sad Songs For Sale is more than a gift to those listeners who have stuck by them all these years. It’s also the perfect entry point for those poised to discover their rich body of work.

poisonedlava.tumblr.com/
Related ItemsIndoor Recess IncSad Songs For SaleSerlin GreavesTeenage Heart
← Previous Story PREMIERE – Jay Pollmann releases new single, “In The Land of Standing Water”
Next Story → Don Amero releases his newest single “You Can’t Always Be 21” and he believes that it “came at exactly the right time” in his life