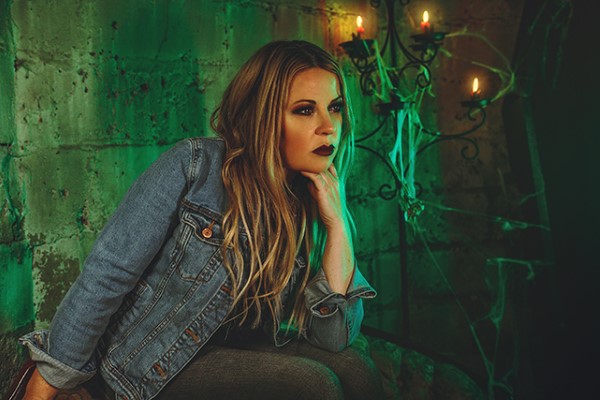 Scottish-born, Puslinch, Ontario-based singer/songwriter Apricity has released her debut single and video, “All My Lies”.

The Puslinch-based powerhouse first released the five-minute track back in October along with a spooky music video, which was directed by Jesse Read of Dropout Entertainment and Toronto Creative; the enchanting song and accompanying short film has already amassed more than 120,000+ streams across platforms — including 80,000+ on YouTube alone.

Sonically, the immediate smash-hit covers ground from alternative music to pop, over to rock, and then back to indie. Though it might seem like a darker song, given its moody lyricism, it’s an easy one to tap your feet and sing along to.

Produced by Thomas McKay, “All My Lies” genuinely offers the listener a healthy variety of sounds — really good ones, on that note. Apricity herself says the direction of her music was fuelled by the creative inspiration of female trailblazers like Shirley Mason from Garbage; Alanis Morrissette; and Blondie’s Debbie Harry.

“I want to sing songs that move me,” Apricity said of the song. “I wouldn’t want to have my name on something I didn’t feel, and this song resonated with me on multiple levels.”

Although elements of her musical abilities are reminiscent of many critically acclaimed female-fronted rock bands, she has really brought something fresh to the modern rock scene. In “All My Lies,” not only does she pack an unmistakable punch with her honest and emotional vocal delivery, but she’s even found herself with one of the catchiest (and most heartbreaking) tracks of 2020.

“‘Cause I’m the one who needs you / Lost in the end / I’m the one who breaks you / I did it again / I will never be the girl in your head / Can’t take anymore,” she sings in this earworm of a chorus — with a perfect blend of attitude and melody. This woman has what it takes to make a name for herself.

Taking her moniker from the Latin word meaning “basking in the warmth of the sun,” “All My Lies” marks the culmination of a passion that has followed the recording artist all her life.

Check out the video for “All My Lies” below, and find out more about Apricity via our mini-interview.

Hi there everyone! I am a Scotland-born, Ontario-based Alternative Rock artist who launched my debut single late last October I grew up in a family that was musically inclined and it is such a big part of me. I have been inspired by many Artists growing up, from ABBA,” to Kate Bush and Blonde. Avril Lavigne, Tori Amos, and Evanescence just to name a few. I am a full believer that music should tell a story and that is what it is all about for me. I want to take the listeners on a journey

Tell us about the recording process behind “All My Lies”?

This was all new for me- so there definitely was a slight fear factor, but I was lucky to team up with Platinum awarded and Juno nominated producer Thomas McKay of Exeter Studios, and Juno award-winning engineer Vic Florencia to work on this song

Thomas put me at ease, made me laugh, but was a drill sergeant at the same time, always pushing me to give my best performance. There were hours spent back and forth working on ideas for the song and getting everything to fit. Thomas and Vic brought me into their musical family, which I am very grateful for. I have learned so much just from the first song. It is very important to be comfortable and trust the people you work with and I had that here. I think that is the most important factor of the process

My highlight was not only being able to launch this single but also launching the music video to accompany it, during a pandemic. It was such a difficult year around the world and I am truly grateful and amazed this happened. It goes back to the amazing team I was able to work with on the recording side and Dropoutentertainment / Toronto Creatives on the video side.

I am currently getting ready to release my second follow-up single from my upcoming EP. We just finished shooting the video for that. I plan on releasing an EP this year. Depending on restrictions, I would love to be able to get out and perform my songs.

There are so many talented artists. I don’t know if I could pick just one! I have always been a huge Alanis Morissette fan, so that is an Artist I would love to work with.

I am actually working on a collaboration right now with another Canadian Artist- so stay tuned!