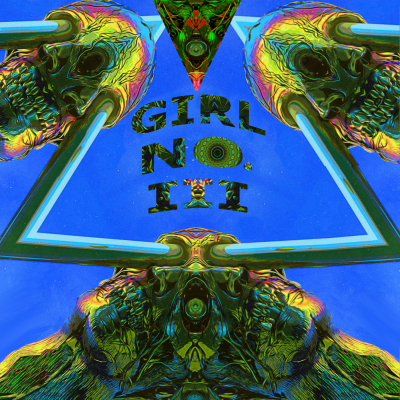 Toronto, ON-based experimental artist, Girl No. III released her self-titled album on March 5, 2021. The album gives the listener a sense of calming nostalgia for a place or time they have never visited. The mostly instrumental tracks feature warm synth chords, clean, billowy bass, percussive ripples, and melodic lines that sound like they could live in a Studio Ghibli film.

The concept behind the album is as abstract as its song naming conventions, “telling the story of humanity and our journey in audio form.”

Girl No. III is also a psychedelic visual artist so many of the songs have vibrant accompanying visualizers. These offer yet another layer to these experimental sonic oddities with their psychotropic mandalas and gleaming cornucopias of coruscating shapes.

The strange time signatures of the polyrhythmic drumming also pair nicely with the constantly moving visuals. Simply, the whole experience from start to finish is a trip.

If you’re trying to figure out what genre the music is, there’s a bit of nu-jazz, math rock, house, synth wave, psychedelia, and trance—and that’s just scratching the surface. Girl No. III is largely influenced by the works of Frank Zappa, Air, and Weather Report, and spans a variety of genres, while not shying away from strange song-structures and key changes.

Check out the album below, and stay up to date with Girl No. III via her socials.

Set your Author Custom HTML Tab Content on your Profile page
Related ItemsExperimentalGirl No. IIIontarioOntario MusicPresstown PRToronto ON
← Previous Story Brittany Kennell releases new single and music video SPADE, a face to face song calling out honesty, vulnerability and saying it like it is.
Next Story → The Dirty Nil release fan fuelled video for “Elvis ’77”