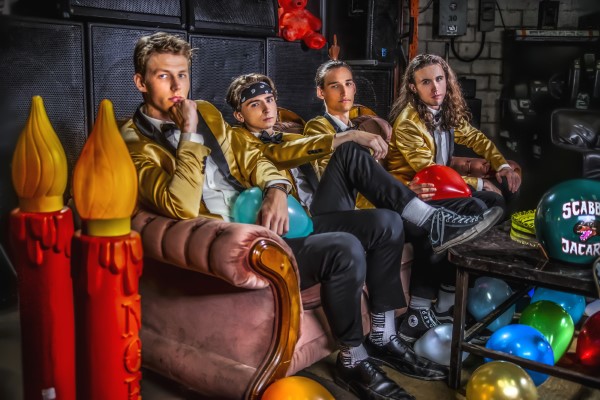 Canadian indie band Black Pontiac just released their new single “Soda Pop Rock” along with their debut music video.  The first single released off their upcoming album From Bad to Worse (And Back Again), the song showcases the band’s youthful exuberance and carefree rock sound. The music video shows off the band’s energetic performance style and quirky humour through a cops and robbers skit, directed in their hometown by director Al Marenco, whose work has been played on MTV Latin America and garnered millions of online views.

Brothers Mack (guitarist) and Sam Riddell (drummer), lead vocalist Matty Mclaren, and bassist Avery John Shoesmith joined forces as high school friends in 2018.  Mack and Sam began playing at a young age, thanks to their dad who is a member of a local band. Mack and Sam met Avery through high school band, and it wasn’t until Mack met Matty at a bonfire, when the two instantly connected over music, that Black Pontiac was formed. With influences from rock to Motown funk and soul to guitar-infused hip hop, with a sprinkle of Red Hot Chili Pepper, the foursome first attracted attention in Vancouver’s underground music scene by their lively live performances. This led them to get signed in 2020 by a Vancouver-based independent music label, Crank Music (a division of Crank Media).

“Soda Pop Rock” follows the streaming success of their first EP, Pony Boy, and its debut hit single “November State of Mind,” which has garnered over 402,000 streams to date.

On March 19, 2021, at 7 pm PST, the band will be doing a Livestream covert from The Roxy Vancouver, which we highly recommend you check out.

Until then, check out our interview with the band below, and stay up to date with them via their socials.

What inspired the concept for the music video?

Definitely the briefcase in Pulp Fiction. It drives the plot forward but you never really know what’s actually in it; we wanted to take that concept and spin it our own way.

How does the story tie into the song’s message?

Where did the title idea for the song come from?

The ether: It was the first thing that came out of my mouth [Matty] as we were trying to find a melody for the chorus.

What made “Soda Pop Rock” the debut single off the album?

Cause it bangs and it encompasses a lot of the different elements that the album contains.

What can fans expect from your upcoming album?

Fans should know it’s gonna be unlike anything they’ve ever heard out of Vancouver. We got really weird with it and with the help of our producer, Matt Di Pomponio, we finally found a way to capture the energy of our live shows into the 10 tracks we laid down for this record. It was this energy that attracted many of our very first fans to us in the first place so we think it’s going to make waves.