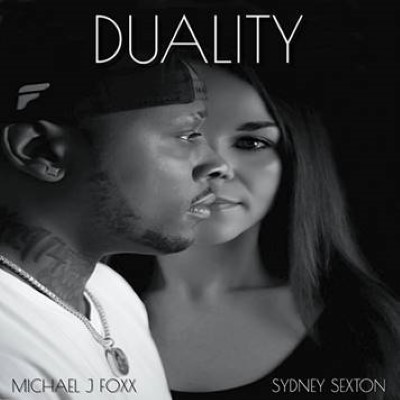 Hot off the release of a handful of hot singles together in 2020, New York City-born, Moncton-based hip-hop artist Michael J. Foxx and Canadian singer/songwriter Sydney Sexton have released their first-ever full-length album together, Duality.

While Duality serves as the pair’s first fully-joint effort, they actually spent the majority of 2020 together, writing, recording, and releasing music in their home studio together. Composed of 10 original hip-hop/ R&B tracks, their past releases include: “So High,” “Just Give it a Moment” and “Winners,” among several other sultry and upbeat tracks.

In the making of Duality, Michael says

“I was thinking along the lines of Yin and Yang, which inspired the black and white cover art. When we were coming up with the name for the album. We decided on Duality… It just seemed to fit.”

It is also worth noting that Michael produced three beats and exclusively completed all the vocal mixes on the collaboration album.

We wanted to display both of our unique styles. Mine is more feminine and airy — R&B/Pop influenced; while Michaels is more masculine and commanding — Hip-Hop influenced, but our sounds just work so well together so we wanted to ensure we maintained the cohesiveness of the collaboration.”

Check out the album below, and find out more about the two via our mini-interview.

I’m a versatile recording artist rooted in hip hop but am open to all styles of music and have a degree in Audio Engineering. I’m the founder of Just One Mic Recordings INC and work as an independent artist. I’m constantly in the studio working on new material writing, recording and mixing vocals, or shooting and editing music visuals.

I have a unique style ranging from RnB, pop, and hip hop which is evident from the array of different styles on display from this album.

I’m in the studio frequently, collaborating with Michael J Foxx and I’m also writing and working on a solo project set for release later in 2021, so stay tuned!

Tell us about the recording process behind “Burn It All”?

In writing the lyrics for the song, It’s an expression of letting go of my past self and burning all the memories to pave the way for the future. From a lister standpoint though I feel anybody can relate to this song.

As far as the recording process goes, the song was written, recorded, and vocals engineered by myself in my home studio. I was feeling inspired by recent events and it was truly an expression to get things off my chest. The song came out super dope! And the Music Video accompanied is found on my YouTube Page.

Working with and collaborating with Sydney Sexton is for sure a highlight of 2020. We started working on the Duality album in Summer 2020 and finalized it in January 2021. A lot of love and work went into this project including music visuals for Burn It All (Michael J Foxx), Pull Me In (Sydney Sexton), and Feeling You (Collab). We’re also working on a music video for Illusions, another record on the album which you can find on our YouTube pages:

I’ve put out a lot of music in 2020, I went super hard every day in the studio and released a ton of music… A solo album (When the Street Lights Come On), 6 mixtapes, numerous singles, and collabs…Sydney is featured on a lot of my collabs. 2020 was a year of growth for sure.

The highlight of 2021 for me has been putting out this project! I’ve released a couple of singles but this is my first time putting out an album. We’ve been working on this since the summer of 2020 and I’m extremely proud of how it came out. Collaborating with Michael has been amazing, and his work ethic is CRAZY. We’re always working, either recording or shooting music videos. And I’m really excited because I’m working on a solo album for May so the grind never stops!

I’m still expanding my catalogue and am working on a 3 part Album Series called Due Diligence – Part 1 is out now across all streaming platforms along with 2 music videos – Kids Don’t Play Outside & Drinking & Smoking – Shot and directed by Sydney Sexton.

I’m in the studio on a daily basis. Still working with Sydney on her solo project, and I’m always open to network and collaborate with other artists. But my goal man is to get that big payoff!!! I keep grinding day and night to push my music and I’m at a point where I’m releasing some of my best work ever.

My goal is to keep making music and visuals… and being consistent for my fans. Following the release of Duality, I’m working on new collaborations with Michael, and I’ve already been putting together my next album. On this solo project, I really want to display my versatility, put out a range of different sounds and styles to cater to the needs of the listeners, and continue evolving as a recording artist.

I’m inspired by a lot of artists! Working with Michael has been amazing and I love collaborating with him because he’s so unique and his lyrics have so much substance. But when I was a child, I began singing because of Celine Dion and that would be a dream come true to work with her! Beyonce is another artist I am majorly inspired by, and all the other female singers that paved the way like Alicia Keys, Ariana Grande, H.E.R. To collaborate with Drake, Lucas Joyner, or Dax would be super amazing too!