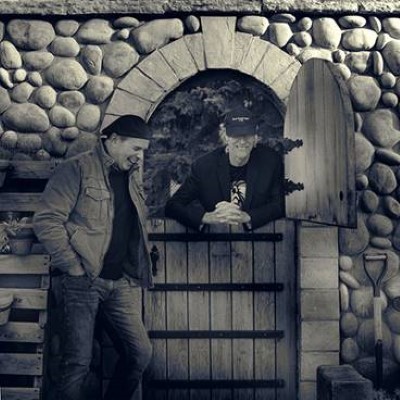 Albertan musicians Al Brant and Dennis Meneely, otherwise known as Meneely Brant have released their latest single, “Coming Days” from their EP of the same name.

The four-minute, 20 second-spanning rock tune is driven by Dennis’s fantastic and inventive piano playing as well as an infectious vocal track by Al — which is complimented and layered beautifully with the harmonies of an uncredited, and powerful, female voice. On top of these key sonic elements, there’s an incredibly emotional and melodic guitar solo right at the end, which makes for a fitting grand finale.

Coming Days — the EP — dropped last November and features the songs “Just an Illusion,” “This Time for Sure,” “Unexpected,” “End of the Line” and of course, the groovy title track. The record was recorded at Danlyn Studios in Sherwood Park, Alberta.

The collection is composed of songs built on strong melodic and harmonic structures, intelligent and thoughtful lyrics, and tasty and top-drawer vocal and instrumental performances. The two speak highly of each other’s writing styles, saying that there’s an almost “telepathic understanding” of where the other will/wants to go in the middle of the writing process.

“I’ve always gravitated towards rock and roll and that’s evident here,” says Brant of the EP. Complimenting those words, Meneely said: “We’re carrying this torch for fusion rock … but that’s just who we are.”

Check out the lyric video for “Coming Days” below, and find out more about Meneely Brant via our mini-interview.

I think it’s fair to begin by borrowing a few lines from the BIO on MeneelyBrant.com in the fact that Al Brant and myself (Dennis Meneely) are an extension of a mothership band, Tacoy Ryde.

That association has always allowed total freedom to explore a wide variety of musical influences and gave us a broad base when it was time to hone in on writing the tunes for Coming Days.

I’ve been a bandleader and sideman on hundreds of gigs over the decades, and have been honoured to share the stage with artists who leave you humbled by their intensity and honesty.

ie: some of my favourite moments were singing harmony face to face with Kenny Shields (Streetheart) or Holly Woods (Toronto) on many tours in the ’90s and early 2000s. I’ve toured extensively with and recorded with Big Hank Lionheart and Jack Lavin in the blues world, doing shows and festivals. I’ve been fortunate enough to have played with acts in Folk, Blues, Rock and Jazz festivals.

My first recording was done in Clovis, New Mexico at Norman Pettys Studios, famous for Buddy Holly, The Fireballs and Jimmy Gilmer. I’ve been a prairie musician all of my life and after many years of the highways from Ontario to B.C. and Yukon to the Dakotas, have settled into enjoying regional gigs with a wide variety of bands playing local festivals and shindigs. I’ve been fortunate to have been playing and writing with Al (Brant) over the last couple of decades, but when our core band took its last hiatus, we found ourselves needing to continue the creative process of writing tunes. We had no intentions, beyond seeing what we could write as a duo. The process became more of a therapy for both of us, a weekly project that kept pulling us deeper.

Al made most of his marks locally with some of the most musically creative artists in our area. He would stand out on a stage with a blank sheet of paper for lyrics and create verses and chorus’s to music that had not existed only moments ago. That fearlessness is contagious.

Al has also been prominent as a solo artist with his own releases, all while raising his daughter Mr. Mom style. His demeanour is revealed as Al has spent countless hours singing and performing individual songs, lifting spirits, in the rooms of hospital patients. His lyrics seem to say what I think I’d like to say.

Here’s a bit about Al Brant …

Al Brant has been making music in one context or another for more than 30 years now. His first foray into the Edmonton music scene was when he performed at a local talent contest and caught the ear of award-winning producer George Blondheim. The result was a three-song demo and a desire to keep recording.

It was through George that Al met Eddie Patterson(Hometown Band, Bobby Taylor & the Vancouvers, Hans Staymer). Eddie was impressed with Al’s vocal abilities and asked if he would perform with his jazz fusion project. This exposure to live improvisation of vocals and lyrics truly expanded Al’s musical horizons.

Al has released several solo albums over the years. His last solo recording Wide Open brought together some of Canada’s best musicians including

A Christmas Carol. The Christmas Carol Project included Maria Dunn, Bill Bourne, Dale Ladoucer, Tom Roschkov, Terry Morrison, Ken Brown and Kevin Cook. Bellstruck Productions Inc. in association with CHUM Television produced a televised version of the show, which aired on Bravo! across Canada for several years in a row. The show had a 20-year run

Al Has also been involved with arts in healthcare for close to 20 years. He is one of the “Artist on the Wards,” for one of Canada’s largest hospitals.

He writes and plays songs with acute care patients.

Tell us about the recording process behind “Coming Days”?

When we started writing what became Coming Days (the EP), it was purely to satisfy the need to see what we could come up with, if we focused our efforts as a duo.

Al would share a shred of a progression and some lyric and I would send him progressions for potential verses or choruses. Some tunes require a thought process while others just roll off the fingertips and tongue. The reward is watching each tune evolve as ideas become realities because the artists involved, all, share your vision.

The vision of Coming Days (the tune) was to make a statement (as is the responsibility of every artist) about what we see going on in the world and speaking a truth to that.

We had been collaborating for many years and found that we were able to each inspire the other into making better writing choices. After a few months we looked back at our efforts and we knew these tunes had to be recorded.

The choice of musicians was a no brainer for us. We’ve been recording music and collaborating with drummer Bill Hobson, for decades. Dustin Roy (bass) and I had met at various sessions and his grooves were always exceptional. The rhythm section brought it.

I (Dennis) had developed a close relationship with Miles Wilkinson (producer/engineer. Anne Murray/Emmylou Harris) and DanLyn Studios from gigs and sessions. Through their generosity, a deal was struck to get the first tracks down in March of 2019. Since we were financing our own project we were only able to book recording times sporadically which was compounded by the availability of the players that we wanted to work with, and the studio. All the players, with the exception of Tony D. (Monkey Junk), are musicians I’ve been making music with for years. All outstanding in their individual musical abilities, and back before the plague, we were all prepared to get our show up and running.

Coming Days was the first tune we recorded, and the session was given a special purpose because a close friend and bandmate had just tragically passed away on the operating table as we were about to get underway. The message came as a phone call and we took a long pause to decide what to do, but ultimately decided that ‘Gary’ would have insisted that we continue. For me, there will always be something very special about that track. Thus the title track.

The fun in making a recording with tons of talented people is leaving the studio after a day of tracking and not being able to wipe the smile from your face. That seemed to be every day of Coming Days the EP. from the masterful Guitar work of Ralph Pretz, Percy Marshall and Tony D., from Mark Puffer’s BG’s to Samantha King’s (Memphis Blues Challenge regional winner) soulful contributions on BG’s.

We were finishing the final mastering of Coming Days on the first day of isolation. Thursday, March 12/2020 and had no idea of what to do from that point. Suddenly the world had changed beyond anyone’s wildest imaginings and we were adrift in the sea of unknown.

The highlight of part one, back when life was the way we remember it, was booking that last day in the studio and knowing we’d be leaving with the finished master of Coming Days. The process from the conception of a tune, to the fruition of the vision, is the reward. The hardest part of the recording process was when it ended, and in our case, we knew we had music people needed to listen to.

Traditionally, we ordered up physical disks to sell and distribute in the rooms we were about to play for our release parties. The band members were ready to shuffle the calendar and the planets were about to align…THEN.

For Meneely Brant, the highlight of post Mar13, 2020, was the support we received when we decided to hand-deliver our actual disk to anyone within a reasonable distance from home. Since all venues were closed, our friend/fans could contact us on Facebook or the like. We would then put a route together and drive to their homes and deliver disks and t-shirts. It was fun just before Christmas to be able to see all these folks at their front door and I think it was a relief for some of them just to have a visitor for a moment. (6ft apart of course)

We hope to find a space for our music on the people’s playlists. We hope to occupy our own lane on that playlist. We hope to reflect on what most of us think and feel. It would be fabulous to get back into the studio and get our new material down. We hope to all stay healthy and survive the setbacks of the last year..vaccine…politics.

After this first year of relative isolation, I think I’d like to collaborate with Martha Stewart and Snoop Dog.

We wish to re-collaborate with everyone on Coming Days and perhaps add some horns or other instrumentation.

There are so many incredible Canadian artists that it would be a pleasure to collaborate with any.