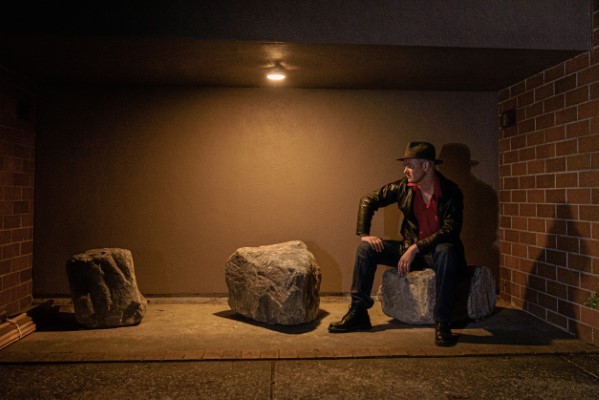 Vancouver, BC-based musician, Ford Pier recently released his album, Gormful In Maya. Although he has released six solo albums, two more with his band, The Vengeance Trio, and another with his string quartet, Strength of Materials, Gormful In Maya is a (mostly) solo singer-songwriter record, representative of the touring he’s been doing on his own through Europe more and more over the last couple of years.

Check out “Donatism” from his album below, and find out more about Ford Pier via our Five Questions With segment.

Ford Pier, musician and entertainer. The pleasure is mine.

I’m an eclectic and a melodist. I favour nested rhymes and upside-down rhythms and clashing hues. My lyrics are hilarious and trenchant. Grandparents recite them to misbehaving children. There’s something like thirteen hours of recorded and released music I’ve written – which seems rather paltry for having been generated over twenty-five years – and within that span you’ll hear hardcore punk, string quartets, country, r&b, noise, and what I used to like to call “The kind of pop you hear before knee surgery,” very often more than one within the same song. Viewed from above, this appears not as a patchwork, but as an undulating surface which catches the light in different ways depending on the time of the day. On the newest record, I decided to branch out and go crazy and do a vocals-and-guitar singer-songwriter album.

It would be dishonest to say I hadn’t done a little writing or home recording here and there, but really, my feeling has been that too much of that would be a misuse of this time we’ve been given. For me, this is a time for listening, for immersing myself in other voices, for being nourished and challenged by what others have to offer, rather than just filling up a bunch of extra time I had on my hands with more of me. I read a lot and listened to a great deal of music, some of it new, some of it long-neglected (the late operas of Strauss: who knew?) I imagine that when I’m able to perform again, or when I’m driven to resume attention to any of the inchoate fragments of this or that which are always piled pretty deep, I will find myself to have been rejuvenated by an imposed fallow spell, but that’s not really why I’m doing it. I just believe that this has been a time for going out of my way to not be creative.

Well, you know, they’re almost all of them so good it’s very nearly impossible to pick just one, but I do have this newer album which I’m keen to whip up interest in, and of those ten songs, I guess I would say that Donatism is perhaps most representative of what I do.