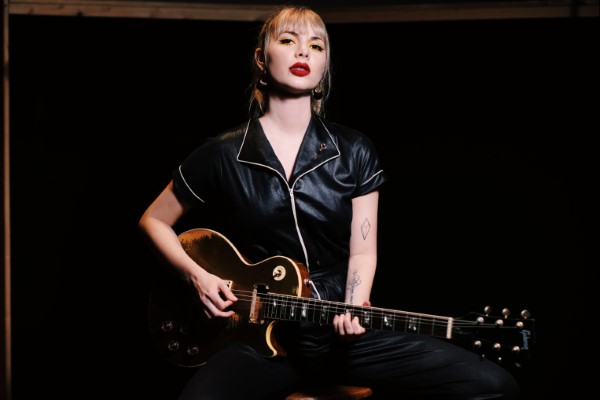 Juno-nominated singer, Kandle Osbourne delivers a video for her sweet-but-fierce single, “Honey Trap”. It marks the Vancouver, BC born-and-based artist’s second single from her forthcoming album, Set The Fire, to be released this Spring.

After leaving her label and releasing her first-ever independent EP, Stick Around and Find Out, Kandle closed out 2020 with a stunning James Bond-inspired single, “Lock & Load”.

As the world awaits the return of live shows, Kandle delivers a cinematically stunning video showcasing an all-female rock band, The Wiccs, to poignantly illustrate the song’s themes.

“It is easy to overlook the subtleties involved in manipulation. For women with drive and motivation, one may already be conditioned to believe that your body or sexuality are the only real assets that society values of yours,” Kandle says of the song. “Under this conditioning, it isn’t hard to imagine all the ways these assets can be turned against you by an abuser, and the idea of using your body as a tool to move forward when all other avenues are closed doesn’t seem so extreme.  What other path is there?  You start to believe it’s your choice, albeit a self-sacrificial one. Only when you start to break free, it becomes clear that you were never given the choice in the first place. We play their game until we make our own.”

“Honey Trap” is inspired by the liberation from a toxic alliance, and the awakenings that follow. On the recording, Kandle is joined by guest vocalists, Louise Burns, Debra-Jean Creelman (Mother Mother), and Kendel Carsen (Alan Doyle, Great Big Sea). With four women around one mic, sweet raspy vocals are juxtaposed with a blend of dirty, fuzz-filled guitars, crunchy drums, and hypnotic groovy bass; before Kandle’s fiery guitar solo cuts into the final chorus.

The video was directed by Brandon Fletcher, featuring actor Keenan Tracey (Bates Motel, The 100), who is the star of the upcoming show, Day of the Dead, set to be released later this year. Honey Trap sees Kandle and her new band of besties, The Wiccs (Louise Burns, Kendel Carson, and Tess Ananda), and reminds us of the powerful impact of reclaiming your independence on and off the stage. Symbolic parallels drawing from historic arts are depicted in the scene where Kandle is suspended. Squid Kink brought in Shibari, also known as Kinbaku, a form of Japanese rope bondage that focuses on friction and wraps instead of knots, derived from Hojojutsu, a martial art from the Edo period. The way the ropes were tied often conveyed the class or crime of the person tied up in it and served as a signature for the Samurai who tied it.

“We wanted to create a nod to our favourite noir films of the 40s — and its more modern incarnation of dystopic neo/neon-noir thrillers — entire worlds riddled with deceit, seduction, and crime, all while exploring themes of consent, entitlement, and responsibility,” says Fletcher. “All these women ‘play the game’ without being fully aware of the deeper danger they’re in. Throughout the video, a shadowy man exploits them all, coalescing in an unwanted touch — something I think anyone who’s been manipulated can relate to — before he walks away with their livelihood.”

Check out the video below, and stay up to date with Kandle via her socials.