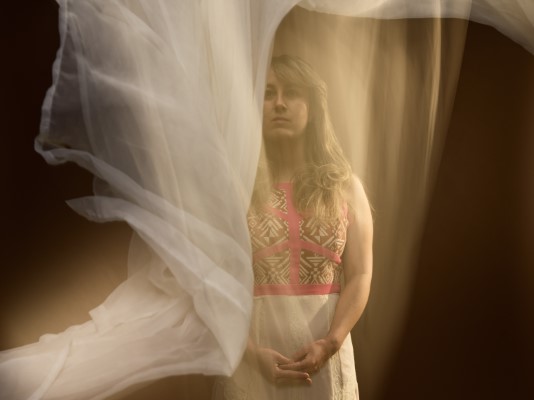 RALEIGH co-founder, Clea Anaïs took time out from training to get her commercial airline pilot license to record an album’s worth of solo material.

Today, we have teamed up with her to unveil a video for her single, “Hazy Days”.

“’Hazy Days’ captures that moment when you meet a new person and know simultaneously you love each other, but that no matter how things play out you won’t move forward in this life together. It is about the practice of really being present with someone, because the second you let go, time will catapult you forward again, and the moment will be lost forever.

The second verse paints a picture for me of old ladies in a beautiful garden pulling and cutting the strings of fate like they are spiderwebs. The whole track is an exercise in stretching and changing our perception and relationship with time, and a part of playing with time included writing a chorus that hints at tracks from the 80’s like Neil Diamond’s, ‘Forever in Blue Jeans’.”

Check out the video below, and find out more about Clea via our Five Questions With segment.

I am a multi-ethnic, first-generation Canadian artist. The music I am releasing now as Clea Anaïs is a new project, and showcases solo writing. However, I have toured a lot over the years in Europe, the UK, Japan, and North America, and worked alongside amazing Canadian artists like Richard Reed Parry (Arcade Fire) on his project Music for Heart and Breath, Woodpigeon, 100 Mile House, Reuben and the Dark, Astral Swans, and my own band RALEIGH. I have shared the stage with great musicians, including members of Broken Social Scene, Dan Mangan, Unknown Mortal Orchestra, Cold Specks, City and Colour, and Of Montreal to name a few. The inception for this solo work began during a residency at the Banff Centre for Performing Arts, and I am really grateful and excited to finally begin sharing this new music.

My creative work centers around storytelling and is really an outlet to express experiences and to connect with others. I love the process of combining lyrics and music, then moving that into building aural soundscapes with the help of other musicians and engineers in the studio. Content-wise I write about whatever moves me emotionally, which can be from personal experience or just observing shifts that are happening in our world. Often riffs will appear in my imagination, and I’ll have to collect them on scrap paper, to decipher later.

Working towards putting out new music and getting this new project off the ground has kept me busy and feeling creative. There are so many facets to working on music, from live streaming a living room show to collaborating on creating music videos, to working on album art concepts.

Fundamental to my creative growth is also the pursuit of learning new things. During the pandemic, I lost my job as a flight attendant, but I also busted my butt to learn how to become a commercial pilot. I continue to feel like there is so much to learn and explore, and creativity is just one mode of moving through ways of trying to understand life. I am very excited to have been chosen to help create work in the upcoming Connecting Perspectives: A Cross-Border Art Initiative, which will be showcased by The Social Distancing Festival spring of 2021.

I would love for them to listen to “Hazy Days”, which is premiering here, released March 2nd, 2021.

“Hazy Days” is one of the light-hearted tracks from the new record, an album that contains some emotionally intricate material. “Hazy Days” is a good track to share in the winter, and I hope it reminds listeners of warm summer nights, nostalgic memories, and falling in love. The record was made both in Canada as well as L.A. at Sound City Studios, and there have been so many stellar artists who have contributed. “Hazy Days” features great Canadian musicians including electronic beats by Chris Dadge, guitar and ambient stylings by Brock Geiger, and saxophone magic by Kevin Sullivan. As well, the music video highlights beautiful choreography and dance by Pam Tzeng.

The list really never ends… but what comes to mind at this moment includes:

Reuben and the Dark has just released a track called “YES”.

JP Lancaster having just released an EP and track called “Shapes In The Dark”.