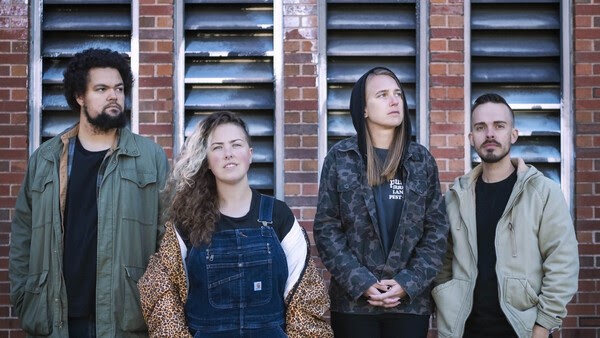 Hillsburn, the Halifax indie-pop quartet have released “Husha,” a slow-burning single that reflects on the disintegration of places that once defined us. “Husha” is the second offering from Hillburn’s upcoming LP, Slipping Away.

The new album was recorded in Vancouver, BC with Grammy-nominated producer Howard Redekopp (Tegan and Sara, The New Pornographers, Mother Mother). “Husha” is the follow-up to the driving and anthemic single “Waking Up.” The new track finds the band leaning into their folksier roots to deliver a contrasting piece couched in an arrangement that is at once careful and haunting.

The powerful and emotional lyrics are a steady arsenal in Hillburn’s repertoire which recounts a narrative of life-changing wrong turns set against the backdrop of unforeseen circumstances.

“‘Husha’ traces the story of a couple visiting the narrator’s hometown while in the death throes of their relationship. The town could be any forgotten corner of post-industrial North America, and the song perfectly captures the nostalgia and feeling of uprootedness that accompany economic decline and displacement. The story was apt before, but it seems particularly resonant now that the pandemic has punctured our collective sense of security” says guitarist Clayton Burrill.