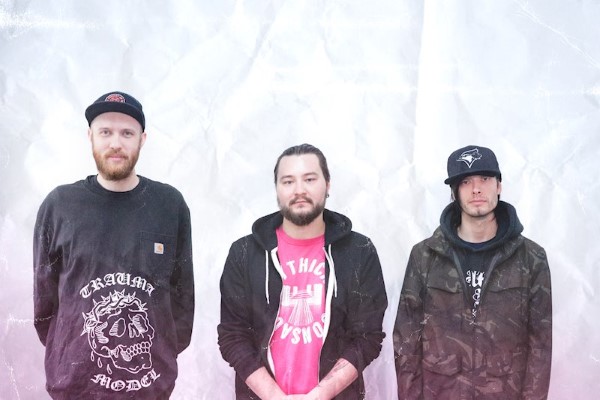 From circle pits to walls of death, the song is the perfect moshing companion. Though we may have to wait a bit longer till it becomes a reality, “Tinnitus at Twenty” exudes the energy and raw tenacity that would be experienced at a live metal show.

“This is a track that Ash Williams can shake his hips too,” says Brendan “Sinco” Sincovich, referencing the Evil Dead protagonist.

Much like their previous release, “King of Thieves”, “Tinnitus at Twenty” touches on the harsh realities of the party lifestyle. Near the end of the track, a new vocal melody is screamed out by Brandon Walton in a sort of guttural poetry. It closes the track with a visceral feel.

This is the second single to come from Trauma Lanes’ upcoming EP, Nosferatu.

Check out “Tinnitus at Twenty” below, and find out more about the band via our Five Questions With segment.

Brendan: Former garbage pail kid with a bit of charisma, also the vocalist

Deren: I thwomp 4 strings on a bass guitar


Sinco: All emotion. Whatever is going on in my life I use it as fuel and get rid of it when we are writing and performing.

Gayton: It’s like a bipolar ocean. I can have nothing for months then a hurricane will hit and I’ll have to lock myself away for a few days or I’ll lose what’s coming out!

Deren: Always experimenting with different styles. I was only introduced to the hardcore music scene a couple of years ago thanks to these lads so I attempt to bring some different genre influences to our sound whenever I can.

Sinco: Staying creative? There’s creativity inside all of us, rainbows shine down from the heavens when I’m feeling blue.

Gayton: It’s been a little tough keeping a consistent flow going without any shows to keep your juices going, but mostly I’ve kept myself busy plucking away at least once a week and being on top of other creative projects that I have on the go on the sidelines. Mostly a year-old Warhammer army that’s collecting dust and in need of paint.

Deren: Trying to stay as active as possible. I was training to become a pro wrestler prior to the pandemic so keeping up with exercises and regimes at home when I can. Other than that I’ve been doing the same as Gayton, painting some old Warhammer models. Plus lots of gaming, catching up on everything I’ve been behind on.

If you were asked to only suggest one of your songs for listeners to hear, which would it be?

If we had to choose only one song it would probably have to be King of Thieves. We feel that the tune encompasses all sides of this band both instrumentally and personality-wise, from the driving verses, riffy choruses, and headbanging breakdowns. Keeping the energy high from beginning to end, that’s what we’re all about.

Canadian beats are all about Canadian music, who are your favourite Canadian artists/bands?

Sinco: The Gorgeous. Also, shout out to Gouge out, Single Wound, Danger Liker, Agent Mulder, & Still Numb (look out for those boys).

Gayton: Death From Above 1979 always surprises me with everything they drop. If you’re looking for something local and hard go check our Rust, Damage Control or our sisters in Trauma Model.

Deren: Definitely The Agonist, been listening to them for quite a long time. In the local scene, our good friends in The Moore Ave Underground and Pearls & Bones are two artists that you definitely need to keep an eye out for. Also Cancer Bats, you can’t forget about those boys.