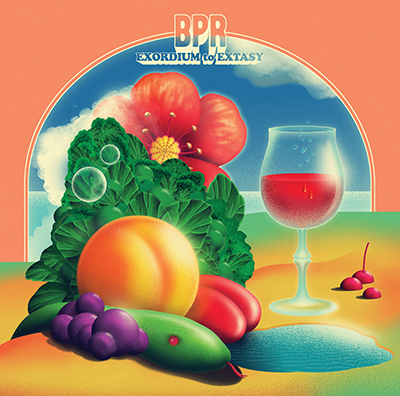 Exordium to Extasy proudly wears its influences on its feathered sequined silk sleeves with big neon block print letters that says “Disco isn’t dead!” With groovy guitars, punchy drums, psychedelic synths with the occasional fancy flute riff, Exordium to Extasy is the disco dance record you didn’t know you needed. Over its funky accompaniment, Exordium to Extasy features a cast of chorused vocals that range from all over the human vocal register, from falsetto to bass (male and female), to add to the party. The lyrics are also infectiously upbeat to match the rest of Exordium to Extasy’s excessive energy, focusing on life, love, dance, and all things fun. As soon as the vocals kicked in on Exordium to Extasy, I felt like Dr. Teeth and the Electric Mayhem had just barged into my living room through the wall to get me out of my head and onto my feet. As BPR’s press notes:

“As disco was dying around the globe in the late 70’s, it was still very much alive and booming in Montreal…[till the scene] eventually succumbed to the steel-toed platform boots of hair bands… Now, this glam squad is here to rekindle the disco flame and make the people of today dance their worries away.”

Not enough artists are making this kind of music right now and BPR is here to show us that everyone else is wrong. Do yourself a favour and show BPR some love before they beam back to Xanadu!

It’s hard to pick standout tracks on such a standout record, but I’d start with “BPR Strut”, “Make Up” and “No Time to Talk”. If the fact that the band put their own name in the title of this track wasn’t tip-off enough, the BPR Strut is clearly meant to be the band’s theme song.’ “BPR Strut” goes hard to showcase all the elements Exordium to Extasy has to offer in a tight compact package. The raucous chorus of friendly vocals, the elated lyrics, and the hyperactive disco accompaniment are all here to announce the show’s starting and “it’s time to dance and never stop.”

“Make Up” is a rare track on Exordium to Extasy as it is not pedal to the metal in terms of energy, but instead works up a slower, honeyed groove to tell an adorable love story about “another beautiful day with the girl I love so bad.” “Make Up” focuses on the joy of the small things when you have the right partner — where even just watching your partner putting on Make Up can fill you to the brim with delight.

“No Time To Talk” is not just a title, it’s a manifesto. With choppy lyrics, aggressively funky bass lines, and combative beats, “No Time to Talk” declares to the listener that if you’re talking, you’re not dancing — and BPR is not going to stand for it anymore. If you’re not at least boppin’ your head after this one, BPR might just leave you behind.