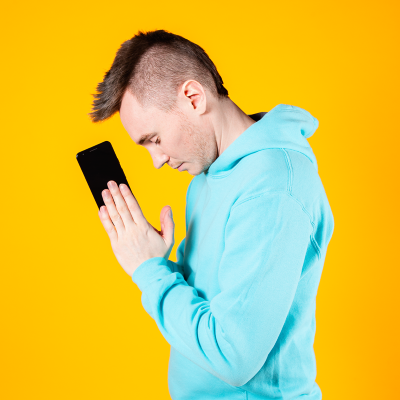 Pusher, formally known as Marty Bernie, is releasing the lead single off his upcoming album Stay-at-Home Popstar. The quirky song, “I Could Give It Up” is the Toronto DJ’s take on society’s reliance on technology, consumerism, and superficiality.

Although the debut album was written before the current pandemic, Stay-at-Home Popstar touches on many of today’s struggles of isolation and societal inequalities.

Here’s what Pusher had to say about his newest release:

Where did the inspiration come from for “I Could Give It Up”? Was it personal to you or was it your reflection of external behaviour?

It’s both personal and universal. It’s about being on my phone all the time which people deal with to varying degrees. More broadly you could say it’s about widespread normalization of addiction. It could just as easily be about coffee but I don’t drink coffee.

How did you decide what sounds and instrument would complement the song’s message?

There’s definitely an element of choosing sounds I like just for their aesthetic in this song, but some sounds – like the recurring xylophone lead – were chosen for their ringtone-esque quality. There are definitely songwriting choices that are meant to mirror the song’s theme. The bridge, for example, quickly leaves the key and changes time signature to create a jarring feeling. The rest of the song is the most straight-ahead pop from the album. That’s how I imagine phone addiction – it all seems fine on the surface having everybody scrolling on their phones 16 hours per day, but there’s also this darker layer of capitalism, addiction, manipulation, and mental health to the issue. I’ve also deployed a handful of well-established pop tropes in the song – conventional pop song form, the millennial whoop, repeating the song title in the chorus – to make the song itself more addictive in a self-aware way.

Why is this song the debut single off the new album?

Every other song is a lot stranger in one way or another. This one feels like a good gateway into the rest of the album, especially from my previous (more pop) work. Also the video and artwork are very fun and use my pixel character ‘Push’ really well, who people will recognize from past album artwork.

What is your hope for the song in terms of audience reception?

I hope it gets hundreds of millions of streams and gets licensed into a major cult film or used in a viral meme and that it generates royalties for me for the rest of my life allowing me to fund more of my own art and hire creatives to make cool stuff. A more realistic goal would be bringing in new fans, entertaining people, and carving out a more unique space in music for my work. I also hope to be able to tour more once we’re all vaccinated.

What else can listeners expect from the album?

This is a fun album to enjoy the collapse of civilization to. So much apocalyptic music is dreary and dark and serious, but this is more like a meme about climate change. I recently came across metamodernism and I think that’s a good description of the overall mood. It’s hopeful for the future (or at least the present), but not naïve in reckoning with present reality.