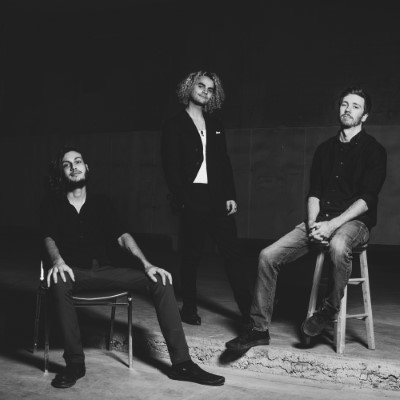 Montreal, QC-based band, Yester Daze have released their EP, Yours To Follow.

Since forming in 2018, Yester Daze has been fronted by lead singer Bradon McShad with Zach Lemay on bass, and Matt Ware on drums. Taking inspiration from artists like Foo Fighters, Muse, Royal Blood, Billy Talent, My Chemical Romance, The Pretty Reckless, the band works to build off of the high energy and honest lyricism to create resonating infectious anthems.

Check out the EP below, and find out more about the band via our Five Questions With segment.

Hey! My name is Brandon and I’m the frontman and guitarist of Yester Daze! I make up for 33.3% of the band.

Tell us a bit about your music and your writing style.

It took us a while to really narrow down how we would describe our sound just because we individually, and as a band, are influenced by so many different genres and bands, but we tend to just say underground punk meets stadium rock, as our songs kind of transcend the two genres. We aren’t afraid to experiment and get out of our comfort zones, if that’s what best suits the song. You’ll find songs that make you want to dance, like “Backseat Bingo,” but then you’ll find something that actually makes you want to mosh, like “Light It Up.” We try to write in a way that’ll engage our audience emotionally or physically, which is why our songs are so much fun live as well because we get to bask in this ball of energy with the crowd and it’s truly special.

In terms of our writing style, it’s really either a jam, or one of us will come in with an idea and flush it out. Some of these songs, I wrote the lyrics entirely with a single riff and nothing else, and other times, all I’d have is a voice memo on my phone of a riff idea. I tend to go through phases where whatever I’m listening to, I’ll try to either write something in that vein or I’ll try to write something that gives me that same feeling I get while listening to whatever artist I’m obsessing over. But sometimes we’ll get ideas out of nowhere in a jam or even just between songs, someone will play something and if it tickles either of our fancies, we’ll run with it.

What we found has worked best for us is revisiting old ideas, rather than forcing something in a jam. Especially since it is a little harder to jam now because of Quebec’s restrictions, we’ve moved to working online. So we all have mini studio setups at home where we really are just doing demos that we can bounce between members of the band and with our producers. That’s not to say that we haven’t worked on newer ideas – sometimes the stars align and you just run with it because you’ll find this really cool idea and you just can’t stop working on it. I personally won’t force myself often to write lyrics because that just results in very disingenuous writing and I am not about that. I tend to really just write if a melody pops in my head or if a single sentence just comes out of nowhere and I’ll end up having that drive to finish at least a draft of it. I find the best songs come when you’re least expecting it.

That’s a very tricky question because we only have 4 songs recorded, but I would say “Backseat Bingo” just because it has everything: really fun lyrics, which are mildly suggestive; an incredibly catchy riff; and a rhythm section that just makes you want to dance. The song really encompasses all of our influences in some way, whether it’d be the tones being used, the way the melody flows, or anything really. It’s become a crowd favourite at our shows just because it’s a fun song.

That’s a little tough because there are so many but definitely the classics like Rush, Bryan Adams, The Tragically Hip, but there are some modern ones that we love just as much like Billy Talent, The Damn Truth, Big Wreck, and July Talk. I personally tend to dabble in a bit of Pop, like Shawn Mendes, and then artists like Avril Lavigne and Alanis Morissette I had playing all the time either in the car or at home when I was a kid.

Share this:
Related ItemsInterviewLootersMontreal QCQuebecQuebec MusicYester DazeYours To Follow
← Previous Story Pusher tackles today’s struggles of isolation with his new single “I Could Give It Up”
Next Story → PREMIERE – Firas Nassri releases video for “Taksim”