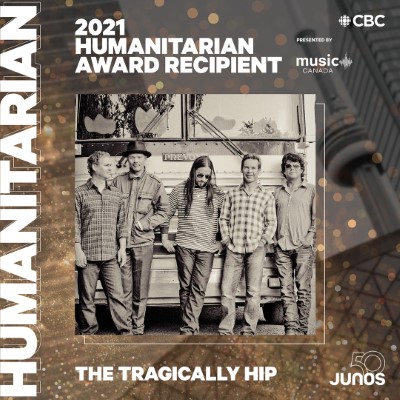 With their 50th anniversary fast approaching, the JUNO Awards are excited to announce The Tragically Hip as the 2021 Humanitarian Award Presented by Music Canada.

For over 30 years, the Tragically Hip embraced philanthropic pursuits as passionately as their music.  In addition to forming the Tragically HIp Community Fund in 2004 to support local charities in their hometown of Kingston, Ontario, the band has helped raise millions of dollars for various social and environmental causes; including Camp Trillium, The Special Olympics, Waterkeeper Alliance, Limestone Learning Foundation, B’nai Brith Canada and more.

After the announcement that their beloved frontman, Gord Downie, was battling terminal brain cancer, the band embarked on a 15-date tour and played one final historic hometown show in Kingston in 2016, that attracted an estimated 11.7 million viewers across Canada and the world when it was broadcast live on all CBC platforms.  All throughout the tour, the band also raised over one million dollars for the Canadian Cancer Society and the Sunnybrook Foundation.

Although the Tragically Hip officially retired after the passing of Downie on October 17, 2017, band members Paul Langlois, Rob Baker, Gord Sinclair, and Johnny Fay still offer a helping hand when needed.  In 2020, through sales of their Courage Masks, the band donated over $50,000 to music industry charity, Unison Benevolent Fund; who provides ongoing emergency financial relief for musicians and crew members affected by the COVID-19 pandemic.  The reusable non-medical cloth masks are still available for purchase at thehip.com.

The 50th annual JUNO Awards will be presented in Toronto on May 16, 2021, and will air on CBC TV, CBC Gem, CBC Radio One, CBC Music, and streaming globally on CBCmusic.ca/junos.