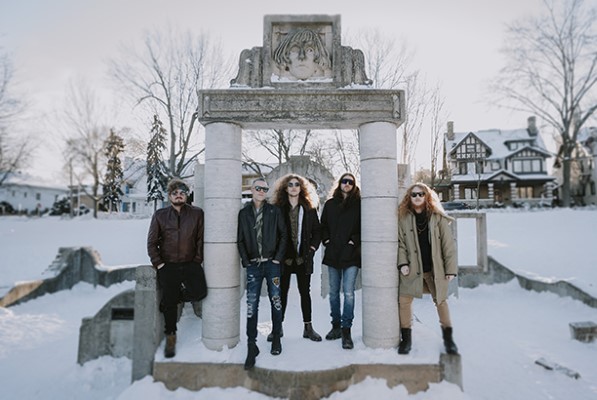 Ottawa, ON-based rockers Taming Sari have unveiled their fourth single, the very emotional and raw, “Gone and Run Away”.

Between the musical composition, vulnerable lyrics, and blazing vocal delivery, the four-minute, 50 second-spanning ballad was made to convey emotion to the audience. It’s also jam-packed sonic elements similar to that of the Southern rock country scene and some of Canada’s finest modern rock acts — think The Glorious Sons or Rival Sons.

From the powerful drum fills, to the seemingly-endless slide guitar melodies and then an all-round groovy bass line to drive the Lynyrd Skynyrd-reminiscent track home, Taming Sari has delivered modern-day magic with this one.

According to the eclectic band, “Gone and Run Away” is a song for “rockers and lovers.” They describe it as a story about jealousy, heartbreak, and “the emptiness one can feel when a person is gone after a relationship comes to an end.”

On why they chose to record a ballad, Taming Sari agreed:

“We had a desire to dip our toes into this slower tempo and explore the emotions of heartbreak within the soundscape of southern rock.”

Check out the video for “Gone and Run Away” below, and find out more about Taming Sari via our mini-interview.

We are the rock band Taming Sari of the beautiful National Capital Region of Ottawa. The group was formed in the summer of 2017 and quickly began writing and recording. In 2018 the band would venture to Toronto and record their debut album, ‘Thirsty from the Drought’ with indie-rock producer Ross Hayes Citrullo. Taming Sari would then enjoy several sold-out keynote performances in 2019 that included opening for such bands as; White Cowbell Oklahoma, The PlanetSmashers, and The Lazys. That year they would also play 3 original songs during the first intermission at an Ottawa Senators game. Songs Down with the Devil and Wake Up Boy continue to find new ears and on February 14th, 2021, the band let loose cupids’ arrow on the hearts of one and all when they released their debut ballad, ‘Gone and Run Away’.

Tell us about the recording process behind ” Gone and Run Away”?

We decided that a ballad would be the direction of the next song we wrote and recorded, having released nine rockin’ fun tracks already. We felt it was time for a bit of a slightly different challenge and to add a missing piece to our puzzle. By the end of November 2020, the band had worked out a song that we really enjoyed playing together and took it to record once again in Toronto with Ross Hayes Citrullo. As is always the case there were several changes made while in pre-production. Overall it was a pleasant few days of teamwork and when we headed back home down the 401, we enjoyed listening to the raw, freshly recorded sound of a sweet sweet ballad.

Despite 2020 being a dream-crushing, life-sucking kinda year…we are so blessed to have listed below some incredible memories from the year of hell that was. Lucky to have too many great highlights to choose just one, maybe you can help us? The start to the year was great with a show in Toronto at The Rock Pile. We also played a sold-out banger at Moose McGuires for Ottawa rock radio station Rebel 101.7’s Real Rock Search. That night the band would gain entrance through victory into the finals of the competition and the bar…was completely sold-out of beer.
In March the band played its final pre-covid times show at House of Targ on Bank St in Ottawa with Alberta rockers King Bull. In July the band would release their single ‘Loving Way’ and in September played to 100 devoted music fans at the outdoor Voodoo Rockfest in Odessa Ontario. Our song and music video ‘Wake Up Boy’ made CBC Searchlight Top 50. Last but not least on the 2020 rundown, we recorded our latest single and first ballad, ‘Gone and Run Away’ in December of 2020.

Just like the rest of the world, we would love to find some more normality and get back to the stuff that makes us human. This means that ultimately, we would love to play more shows, more festivals, and of course, we want to record more music and release lots more content! We are loving the connection we are building with our fans and the responses we get from our art definitely drive us forward.

Everyone in the band is such massive classic rock and metal fans… the list of who we would be interested in working with is most likely endless but if we could find a way to write a song or two with a Canadian music legend like Gordon Lightfoot, Sass Jordan or Myles Goodwyn to name just a few…we would of course be over the moon to learn from that kind of talent and knowledge base.