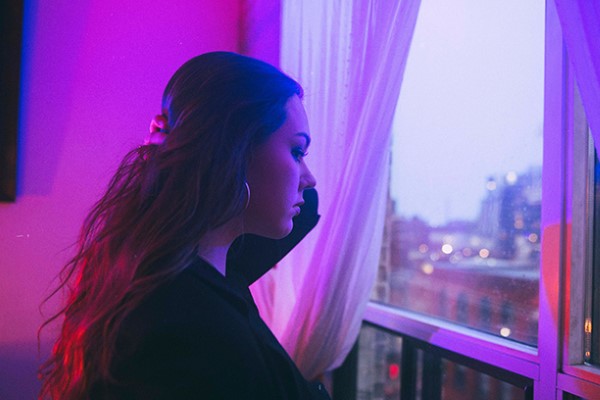 Canadian alt-pop and EDM prodigy Mikalyn Hay has unveiled her new single, “I Love You Too Much”.

“It’s dreamy, it’s heartfelt, and it’s got a melody that floats along at a pace that reminds me of life in the small city I grew up in,” the Guelph, Ontario-based chanteuse offers of the track that’s a sonic sidestep from her EDM foothold. “The distorted drums and 808 bass from Chris give it an urban touch.”

She’s referring to producer Chris Grey (88Glam, K. Forest), with whom she’s collaborated with since they were early teens.

“We’ve long worked together,” Mikalyn details, “since we were discovering who we are as individual artists, and as a combined force.”

Just like their songs and production, the duo shot and conceptualized the video to accompany the track.

“The video for ‘I Love You Too Much’ captures and reflects the mood we wanted the listener to feel,” she shares, adding that it underscores “the longing, the hopefulness, the caution, and the beauty of the moment when you realize ‘I love you too much’ about someone.”

Watch the video for “I Love You Too Much” below, and find out more about Mikalyn via our mini-interview.

Hi! My name is Mikalyn, I’m a singer and songwriter from Guelph, Ontario. I just released my new single “I love you too much,” a new start from the music I was releasing before! I’m 18, I’ve been writing since the age of 7 (the first song I remember writing was called “Lollipop Land, and it will never see the light of day, and I know my family has it stashed away somewhere in case they ever want to blackmail me). I am proficient on the piano which is my go-to instrument, and I also play guitar, but so far the only ones that get to see me perform on guitar are my beloved Patrons lol.

Tell us about the recording process behind “I Love You Too Much”?

ILYTM was a super fun song to record. The producer & co-writer on the song happens to be one of my best friends, Chris Grey. I’ve been working with Chris for quite some time now, and I always have the best time with him. We met when he hired me to sing one of his songs when I was 14 – called Nostalgia. He started off by making the track, but we weren’t quite sure where to take it. Usually, we freestyle over whatever beat he made, singing completely random lines until we hear one that we can actually take seriously. We came across the idea of “I love you too much” and decided to run with it. When it came down to actually recording the song, we experimented with quite a few harmonies in the chorus which I loved (I did choir for 5 years so I am obsessed with harmonies and how they can add to a song). We recorded the whole thing in Chris’ home studio in Toronto. Afterward, we rewarded ourselves after with Bagels from the Bagel House. Recording the music video was super fun as well, it was very spontaneous. One day, we just decided to rent a car and go for it, with Chris directing/editing. We really felt the song suited a driving carefree lose yourself in the movement vibe. It was a great excuse to just spend a day driving around blasting music, and I am super happy with the end result.

2020 was a crazy year for everyone, but it also brought some amazing memories. First off, I was able to connect with fans through live-streamed shows in a new way. I regularly have people join from the UK and all across the United States, and they wouldn’t have been able to come to see me play a show in Toronto so it was cool to expand my live performance that way. Another huge highlight was I started University, where I am studying “Popular Music Studies.” This has allowed me to meet so many cool people, and learn more and more about the music industry as I continue to pursue my career. Hoping that I can convince some of these talented students to form a band with me. Another huge milestone was hitting over 2 million streams! 2020 really taught me to cherish the little things and moments, and of course, I am more than excited to be able to go to a concert or an in-person co-write but this year showed me how privileged I am to be able to do that in the first place.

I hope to release a steady stream of singles, and really dive into creating a new brand for myself that listeners will get. For the past 2 years, I have been primarily doing EDM which was a super cool experience, but I am ready to turn a new page and release music that I feel really speaks to me and others that are going through similar things. EDM allowed me to explore a whole new side of the industry, and it was fun to see how my songs could be interpreted and changed. Now, I feel like it is time for me to rebrand, write with as many people as possible, practice as much as I can so that when live gigs are back I will be at the top of my game. Being an indie musician I am doing so many parts of the business myself – and I know that if I ever crack through to the other side, I know I will be ready to handle the pace and understand the game. In 2021 I want continued and steady growth.

There are so many amazing artists out there, it is hard to pick just one. I think my dream collaboration would have to be Marina, because I have idolized her since I was 11 and she is my biggest musical influence. Allie X would be a great collaboration, I am obsessed with her latest album and her songwriting style. Jessie Reyez is so cool, I feel like I could learn a lot from her. I love her music and heard her speak at a SOCAN awards banquet and she was inspiring and cool. Also, Chad Kroeger was there as well and he was hilarious – so that would be a fun collaboration too!! The list honestly goes on and on. There are so many people I look up to in this industry.