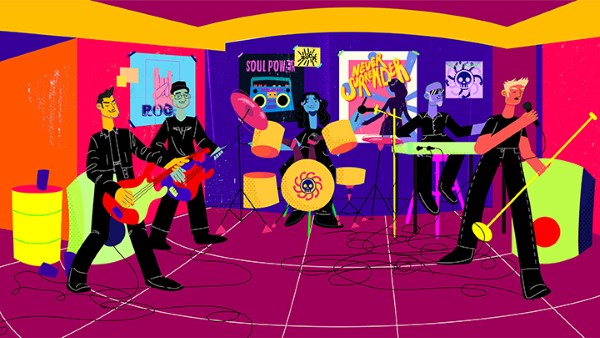 After over 25 years apart, London, ON’s hard rock influencers, Blu Bones are back with a brand new single, “She’s Got a Way With Love”.

The two-minute, 50 second-spanning rock song came to fruition after frontman Gord Prior decided it was time to address all the emails and social media tags he received from longtime fans “begging” for Blu Bones to either get back together or record something new, at least.

“Most of us never thought of reuniting or doing anything new musically after all of these years,” admitted Gord. “But because of social media, over the past decade, we’ve received so many emails from fans and friends we never knew we had — from all over the world.

Gord continued: “They’ve begged us to do something new for a long time. To reunite somehow. This song, this moment, it just felt right and the timing was perfect for everyone.”

The unexpected comeback single was released on February 14, 2021, and saw the London-based band reunite in a fully-animated music video, created by the dedicated and talented team at Flikli Animation.

After privately seeking out animators through his personal Facebook page, Flikli’s long-standing CEO, Rich Adkin, graciously raised his hand to help animate the brand-new tune. It only helped that Rich was a die-hard Blu Bones fan and had been since their beginnings in the early 1990s.

The trippy and dazzling project takes place in a magical world, where the members of Blu Bones seemingly never aged following their disbandment. Additionally, this world allows them to do absolutely anything that their creative imaginations allow.

The track was mixed and recorded by the legendary Matty Green at Studio 55 in Los Angeles, California. Matty has not only worked with the likes of Dua Lipa, Ed Sheeran, and Coldplay, but Sir Paul McCartney as well.

Check out the video for “She’s Got A Way With Love” below, and find out more about the band via our mini-interview.

Hi, I’m Gord Prior. I was born in 1967 and I live in London, Ontario. I left home at 17 years of age to tour full-time in a rock cover band. We played three sets a night, six nights a week, just about every week of the year, and lived in an old school bus traveling all over the country. It was high adventure at the time and a great way to build experience singing live, learning survival skills and doing music. By the early 1990s I had my own original band called Blu Bones and we released three videos to Much Music that received some great support and we toured the country back and forth with all kinds of bands from the Tea Party to Kim Mitchell to Our Lady Peace, even April Wine!…the list is long!

Sadly we disbanded after some internal issues within the band a year later after our budding success and our first record deal.

I’ve never stopped writing and recording music over the years but I’ve kept a low profile doing the odd live show here and there while maintaining another professional career outside of the music world and raising a family. That changed recently after I reunited with my old bandmates from Blu Bones last year to record some new music.

Tell us about the recording process behind ” She’s Got a Way with Love”?

Reuniting with old friends is great and the song came effortlessly. More out of just hanging out with my guitar player Boris at our original rehearsal space from the old days. He had the riff and I had a melody and words right away when he played it for me. We wrote the main chorus in minutes. I recorded it on my iPhone right away.

He and I gradually built up an arrangement for the song and sent it out to the other fellas via email. Everyone added their own parts with really no push back from anyone. All ideas were used and on the table. Our keyboard player Ray Coburn (also of Rodger Hodgson) is in Montreal and did his parts from there. The rest of us are here in the London area. We sent our tracks to Matty Green at Studio 55 in LA to be mixed. Matty has worked with Ed Sheeran, Weezer, and Sir Paul McCartney. The end result was our new song ” She’s Got A Way With Love” and also the awesome animated video that Flikli produced for us. They blew our minds with that animation we are so grateful!

Writing and recording our new song with the original band after over 25 years of not doing anything new together in music. We are very grateful!

Building a great team of producers, engineers, and animators and collaborating was incredibly fun. All around one new song. One idea! Tons of fun!

We hope to write and record more new songs. Make more music videos and hopefully do some live shows in the future. We hope to reach more people with our music and just do the best work we can. The process of creating a song is as much fun as releasing it to the world. There’s a lot of camaraderie and laughs making music. We don’t overthink it anymore. We let it flow and remember to have fun. Hopefully, the audience can feel that. The joy in it. No rules! Music is great therapy for the listener, the creators…everyone!

I would love to collaborate with my friend Ron Sexsmith. He’s a genius in my opinion and I’m a huge fan of his songwriting. Even though we’ve hung out several times privately I am still too nervous to ever ask him. Maybe one day I’ll find the nerve. You never know.