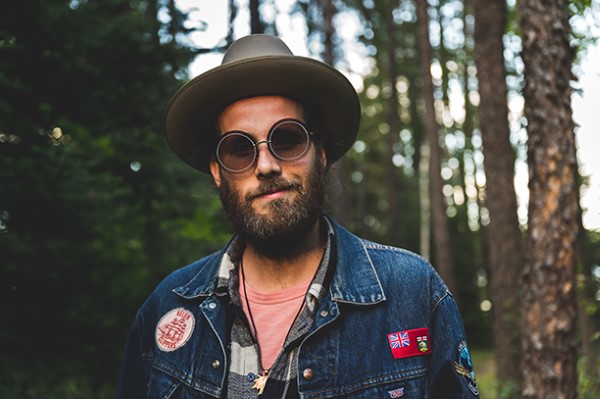 To celebrate, Mister K has recorded a live, acoustic rendition of the song from the comfort of his own backyard in the region of Lorette West. The powerful performance of “Tamarack” features the aspiring musician’s wife Avery on backup vocals and guitar — and their adorable bulldog Luna, for emotional support.

Mister K points out that one of the sonic “easter eggs” found in the new album comes from his little canine companion; every time the word “moon” is sung on In Event of Moon Disaster, Luna rings a bell.

“If you listen hard enough,” he adds.

Overall, In Event of Moon Disaster is described as a musical journey through highs and lows, or “a pendulum swung through the hardship of darker days” (like the song), according to Mister K. Inspired by the ongoing COVID-19 pandemic, it’s ultimately about overcoming adversity, emerging from the darkness and finding the light at the end of the tunnel; or even some sense of hope.

“I knew I wanted to make an album steeped in poignant and vulnerable themes, but I wanted it to also have some pop and sparkle.”

Check out the acoustic live video for “Tamarack” below, and find out more about Mister K via our mini-interview.

My name is Kevin Kratsch, but as an artist, I perform and create as Mister K. The name stems from the fact that I live in a historic Manitoba schoolhouse built in 1896, and I also happen to be a certified shops teacher.

The Mister K project is built on merging my abilities not only as a musician, but also, a photographer, graphic artist, and videographer. The result can be seen in the rollout of my debut record, In Event of Moon Disaster. It is a conceptual, cosmic folk-pop album rich with layers of hidden synchronicity between the album art visuals, lyrics, and soundscapes.

The album is a musical journey through highs and lows, a pendulum swung through the hardship of darker days. It is a story of overcoming adversity and ultimately emerging from the darkness with a story of hope. The album is based on many of my own experiences with anxiety and depression.

Tell us about the recording process behind ” Tamarack?

Fun fact, the percussion in this song includes a corn broom sweeping, beating on a guitar case, and foot stomps on the control room floor.

‘Tamarack’ is an optimistic love song, and an ode to my favourite conifer, the Tamarack. I also wrote it to include conifer tree identification. Did you know you can tell what type of conifer tree it is by its needles? Pine needles grow in pairs, spruce needles are square, and fir needles are flat, and of course, the Tamarack shed its needles in winter. My mind was blown when I learned all this!

The recording of the In Event of Moon Disaster album, with the exception of the kit drum, was done exclusively with myself and producer Rusty Matyas. Rusty had recently overcome a nearly fatal bout with alcoholism. In studio, we found inspiration and empowerment while bringing the songs to life. It was a really therapeutic experience I won’t soon forget.

On my property, we have a fox den that has a new litter every spring. The highlight of 2020 was the time I got to spend observing and documenting the den.

Between March and June, while working from home, I got out every day at 6 am to film and take photos of the foxes. I spent about three hours a day sitting in a photography blind (a pop-up ice fishing shack) filming and taking photos of the foxes. It started as a way to combat the onset of anxiety brought on by the uncertainty of the music industry and life in general during the start of the pandemic.

Observing the foxes forced me to slow down and listen to not only my environment but myself. I was given time to reflect, assess, and just sit with my being. It was a meditation I didn’t know I needed.

The resulting footage was eventually compiled into a music video for the album single, ‘Harmony’, and with the remaining hours of footage, I compiled a music video with the foxes for the entire album! Both can be seen on my YouTube channel or website.

Above all,  I hope to keep inspired and creating! I have been writing a lot of new material these days and demoing songs to start a new record. I have also recently been mapping out a really exciting plan for the summer that I can’t wait to share with you. Pandemic or not, you can expect some exciting content and new material from Mister K in 2021!

That’s a really tough question. I am gonna go out of the box and transcend the musical realm and say I’d love to collaborate with an animator or a visual artist.

I am a big fan of the Midnight Gospel on Netflix. I think working with Pendleton Ward on some sort of conceptual musical animation album would be pretty surreal! I am sure working with Duncan Trussell on anything would be super fun too, if only just to hear the sheer wonderment, joy, and excitement of his voice. (if you’re familiar you’ll know what I mean)

If I am required to select from a musical arena, I’ve really been into Andy Shauf’s work recently. I really admire his conceptual writing, his abilities as a singer/songwriter, musician and I am just as big a fan of his production style.