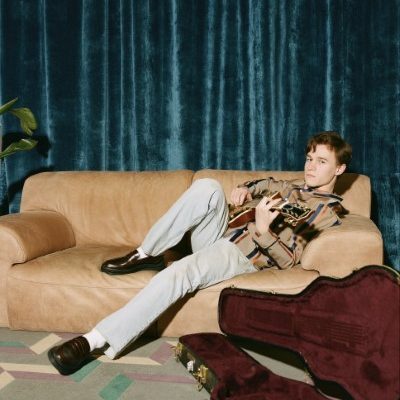 The single began with the two lines “Hand on my heart, you’re the only one I want to hold”. Johnny came up with them before Ellis arrived at the writing session and originally intended them to be for a happy top 40 song but the meaning took a different turn after Ellis heard them.

“My interpretation of them was of someone longing for a lost love. They felt like someone telling the person they are longing for that,  even though that person is no longer there, they are still the only person they want to hold.”

Then came the chorus and with it flooding memories. “I still see you walking down these halls/ See your shadow dancing on these walls. Hand on my heart, you’re the only one I want to hold. ”

They then wrote the second verse with the intention to depict how a relationship becomes ingrained in our routine. Simple things like driving home or picking up groceries are subconsciously tainted by the relationship that the person was in. The idea is truly relatable.

“After writing this verse, we played through what we had of the song and felt that a bridge was needed. “If only you could see/ All along you were my missing piece”. These words stemmed from the image of how puzzle pieces fit together. “And I can’t let it be/ Cause even when you’re gone I’m still giving you the best of me” to round out the bridge.”

Check out the single below, and find out more about Ellis via our Five Questions With segment.

Why, of course! Hey everyone! My name’s Ellis Schoel and I am a singer/songwriter from Montreal. I sing, play guitar and have recently started to learn to play piano. My favourite genres of music are folk, rap and pop but I’m also a fan of country, classic rock and indie music. I’ve released 3 songs so far, with Hand On My Heart being my newest single, and I’ve got more on the way soon that I can’t wait to share with you guys!

My music is a sort of mishmash of all the genres that I’ve listened to throughout my life but folk and pop are the ones that stand out the most. I like using pop melodies paired with lyrics that have a message in them because I think it’s important that your music says something. My favourite songs have always been ones that have made me feel and so that’s something that I hope to accomplish with my music. I want the listener to feel the music and lyrics.

At the moment, because of this whole pandemic thing, I don’t have any upcoming shows scheduled but when the weather warms up a bit I plan on doing some outdoor shows.

All the shows I’ve done so far have been solely me and my guitar on stage but for my next ones, I’ll be adding some more musicians. They tend to be a collection of moments. Moments to dance, moments to sing along and have fun and moments where we’re all connected with the only sound being the music that’s being played. My job as the performer is to create those moments and to go from one to the next in the best way possible and that’s what I always strive to do.

If I had to suggest only one song it would have to be my new single Hand On My Heart. It’s a song that really represents where I’m at at the moment as an artist and I find it really beautiful and I hope that the people that hear it think that it is too.

That’s a great question. In terms of Canadian music, recently I’ve been listening to some early Drake off of his album Take Care. When it was released, the only song from it that I really listened to was Headlines but now I find it sort of cool to be able to go back and listen to what was the start of the megastar we know now. I’ve also been listening to some Joni Mitchell; songs like Both Sides Now and River. Neil Young’s also always been a favourite of mine so he comes around in the mix every now and again. I love to listen to the album they made of his show at Massey Hall in 1971.