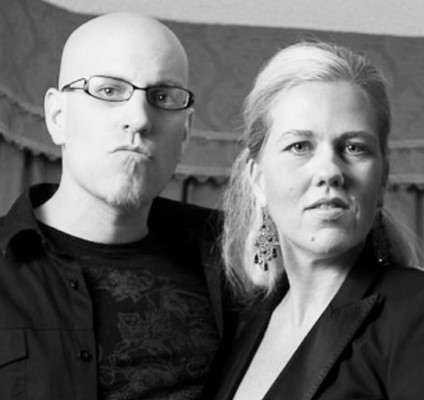 Canadian rock duo, Eclecticus is made up of Gar Reid and Tiina LeMay. The two have unveiled their new single, “Took Me For Granted”, along with a video to accompany the release. The single, which is fresh off of their fifth album, aptly titled Five Point 0.

Landing four months after their previous offering, 2020’s Take Me Away, the duo says making Five Point 0 was cathartic and reinvigorating. Specifically: the video for “Took Me for Granted,” was shot on location in their home in Toronto.

“‘Took Me for Granted’ is one of our favourite songs on the release, so it seemed fitting we’d put together a video for it as well,” Reid shares. “Shooting it was a lot of fun; it allowed Tiina and I to both get our ‘freak’ on and release a lot of the pent-up energy that had arisen during the lockdown.”

“It’s really a testament to the fun Gar and I have together, both in music and in life,” LeMay agrees.

“These days, we are stuck inside,” Reid continues, noting that the new album arrived in quick succession to its predecessor. “We figured: what better way to use our time than to make more music?”

“Five Point 0 is different from our last album in that it has a lively pop-rock vibe,” he adds. “Take Me Away felt darker, and more intimate in its acoustic base.”

Check out the video for “Took Me For Granted” below, and find out more about the duo via our mini-interview.

TIINA: Absolutely, thank you!  Gar and I are singer-songwriters from Toronto. Not only do we make music together, we are also life partners. To collaborate with the one you love comes with its challenges but I wouldn’t have it any other way.

GAR: With five albums under our belt, which includes the release of two albums in the last four months, Tiina and I have been pretty busy! We released Take Me Away in late 2020, and now our new five-song EP called Five Point 0. The songs on this album are crowd favourites when performed live, so we decided to get them out there for wide release.

Tell us about the recording process behind ” Took Me for Granted”…?

GAR: Tiina and I recorded it in our home studio. Some of the recording was done pre-covid, including Hamish Young’s bass which really gives the song a funky groove. I engineered the album but won’t bore people too much with the geeky details;  I used various recording techniques to ensure there was a good capture of the vocals and the instrumentation and then mixed the song. It really is another passion of mine, outside of writing and performing. Tiina really helped in producing the song, particularly in the recording, and helping me with the mix.

TIINA: Gar and I use a whiteboard to plan out all the instruments and vocals we needed to record for each song. It really helped us keep on track, no pun intended…lol

TIINA: The most notable highlight in 2020 is that our album Take Me Away was submitted to the Juno Awards – which is a first for us. Even if we don’t get nominated, we are excited with the notion of being considered. You have to celebrate these milestones – it keeps us inspired!

GAR: Also, working with Eric Alper; he really helped us get our music out there and he is such a pleasure to work with; he knows so much about the industry.

TIINA: We hope our single “Took Me for Granted” takes off and is on the radio on regular rotation, and continues to be placed on music curators’ playlists, and enjoyed by music fans alike. Who doesn’t want a hit on their hands?!

GAR: For sure, we have always been open to collaboration, right from the release of our first album ECLECTICUS I: we collaborated with UK Asian sensation, Roach Killa, who was featured on two tracks from that album called “God’s Finger” and “Rude Boy” and we also worked with UK guitarist Del Rose, long time mate of John Leckie, music producer (Radiohead and Stone Roses). Actually, Mr. Leckie purchased our first album, which he said he hadn’t done in 25 years!

TIINA: We would really like to work with various artists, musicians, and producers that will elevate our craft and future music releases–that is an open invitation, btw, to all music collaborators out there!