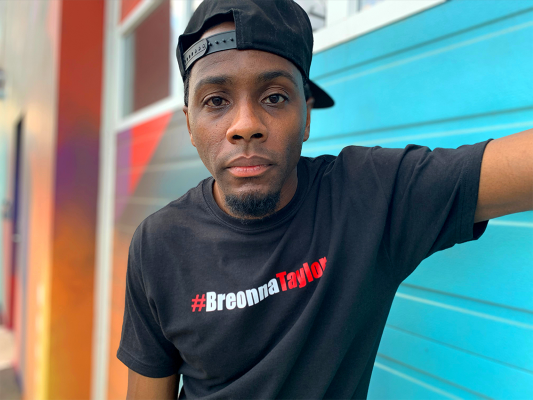 Edmonton hip-hop artist, Arlo Maverick has unveiled his video/ short film for the track, “Hashtag”, a song of protest about racial profiling and police brutality that will appear on his forthcoming EP, Soul Merchant, set for release in the spring of 2021.

The video arrives amidst Black History Month to continue the conversation around the issues that Black people continue to face nearly a year after the global uprising in response to the murder of George Floyd.

The video was co-directed and co-edited by Maverick, and the concept draws from the real-life stories of Ahmaud Arbery, a 25-year-old Black man who was fatally shot while jogging; Tamir Rice, a 12-year-old Black boy who was playing with a toy gun and fatally shot; and others who were killed by police or while in police custody. In one lacerating verse, Maverick calls out the difference between how white men and minorities are treated by police. “Todd gets irate, he’s told calm down/Jerome gets upset, he gets shot down,” he raps.

With vocalist Riwo(of Melafrique) belting the song’s chorus, “I don’t want to be a hashtag one day,” and Black people being shown in everyday circumstances getting killed at random, Maverick suggests the prevalence of the bias-based policing that leads to violence.

“When you see the chalk outlines of bodies and all of the hashtags come up at the end of the video, I wanted the viewer to be overwhelmed by the number of names on the screen. For them to think, ‘How many more Black lives need to be taken for changes to happen?’” said Maverick.“Since the video was filmed, more people have been killed. Before the end of the year, it’s going to happen again.”

The title, “Hashtag,” is also a reference to fair-weather activism on social media and the use of hashtags to bring attention to the Black lives lost at the hands of police.

“In using hashtags for something as serious as Black death you sort of make light of it,” said Maverick. “I think social media activism can be really powerful, but I also think it can desensitize. People get concerned, demand changes, these hashtags circulate, but without enough real action nothing will change. There’s still not enough accountability in the justice system.”

Check out the video below, and stay up to date with Arlo via his socials.