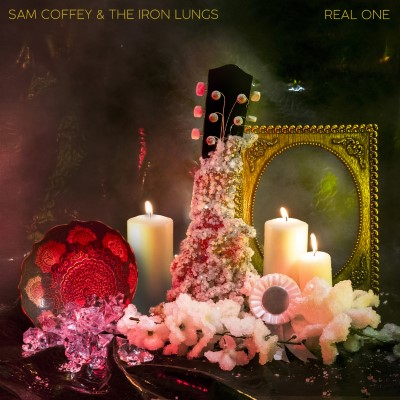 Real One is the 3rd studio album from the Toronto-based band, Sam Coffey & The Iron Lungs.

Real One is an anthemic arena rock album with a side of punk. The overall tone of the record is aggressive and raw, but it also is relentlessly upbeat. The lead male vocals of Sam Coffey are practically shouted out to the listener: not in a call to anger, but in a call to determination to come together. Coffey’s energetic vocals are rounded out with blown-out gang vocals, aggressive guitars, and pounding drums —  though some tracks also feature keys, saxophone, and operatic female vocals when Coffey wants to heighten the drama of a given track. The tracks’ lyrics center on familiar, everyday concepts such as, lusting for fame, falling in love & keeping your authenticity, with choruses that are purpose-built to sing along with. You really get the sense that Coffey and his entire accompaniment are resolute in helping us to all pull together.

The standout track on Real One for me was “What This City Needs”. This track really embodies the defiant, anthemic tone of the album. Coffey explains himself how the song came to be:

“‘What This City Needs’ came out of a despondent sense that I have that the city I live in hates poor people. It’s never been more apparent than during the COVID-19 pandemic. There’s a provincial-wide order to stay home, yet bylaw officers are tearing down encampments in parks where our neighbors are staying to ride this out. I get there are no easy answers… But how can people stay home, when they don’t have a home to stay in?”

To this problem, Coffey gives us the daring chorus on the track that whatever Toronto thinks,  “[w]hat this city needs is a man like me around.” Sam Coffey & The Iron Lungs’ also make it clear, from the lyrics to the brash accompaniment, that they are prepared to back up our own fight to stand tall in our own town.