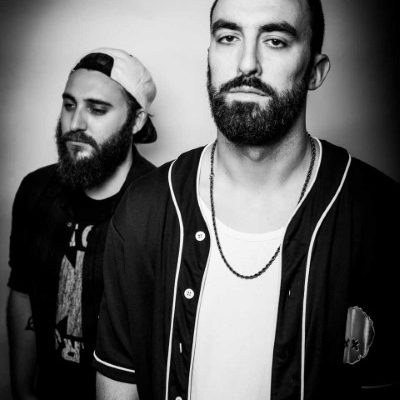 The track speaks to the concept of looking around, seeing a society rife with hypocrisy and in a dearth of empathy, and saying “I’ve had enough. I’m tired. I’m going back to bed,” the pair say.

“The lyrics are reflective of society, the human experience, and our interactions with each other,” frontman and producer Andre Thibault explains. “They point out a lot of hypocrisy and inconsistencies in the way we behave versus how we expect others to behave.

“So much of growing up in the technological age requires increased human to human interaction but, as we rely heavier on technology, we lose that empathy and compassion that helps our society function.”

“We wanted the song to feel like a rock song,” drummer and percussionist Matt Robillard offers of “Sleep.” “We tried to stay away from samples for the instrumentation as much as possible so the music feels organic, more energetic, and has a very human element to it.”

“You can see Andre rapping and singing while surrounded by people in a zombie-like state, shuffling around, engulfed on their phones. Portions were shot the day after Andre started dialysis, having since undergone a kidney transplant this past November.”

“We even returned to the back area of Raven Street Studios, where Matt and I studied audio engineering.”

Check out ” Sleep” below, and find out more about the duo via our mini-interview.

We are DRAE, an alternative duo out of Ottawa, Canada.  We fuse a lot of influences into our sound – drawing from alt-rock, blues, dubstep, hip hop… we try not to box ourselves in.  The result is a high-energy sound that’s been compared to Rage Against The Machine and Grandson.  We’ve both studied audio engineering and have been playing in various groups together spanning the last decade. We’ve taken that experience, combined it with our varied musical tastes and passion for social commentary, and that melting pot spawned the music and the message you hear now!

Tell us about the recording process behind “Sleep”.

Andre (production, vocals) started writing this song in the middle of 2019, working with guitarist Matthew Yorke to build the basic skeleton of the track.  We wanted it to sound like a ROCK song, while still staying true to our fusion of genres.  So, the big power-rock-style chorus came first, with the verses being built to maintain that same energy – and we couldn’t forget to have a classic Hendrix-style solo in the middle! In keeping with the organic feel of the song, we wanted the drums to sound like they were played live, while also being appropriate for the hip-hop elements of the verses.  So Matt (drums/percussion) actually recorded his portions on an electric drum kit.  This ensured the cadence was organic but the drums themselves were tight and malleable.  The vocals have Andre’s signature megaphone effect layered to add prominence and give the lyrics a “public service announcement” feel for the listener.

Musically, definitely the release of our first single through Dance Plant.  “Take Cover” gave us growth and a platform like no other project before it, so watching that growth was definitely a huge highlight for us last year.  And having so much support from Live 88.5 (Ottawa’s alternative rock station) was a huge boost for that as well.  On a personal note, Andre was finally able to receive a kidney transplant from his mom, after dealing with chronic kidney disease / renal failure for 2 years.  So, 2020 will definitely be remembered for more than just the pandemic.

How did “Sleep” come about?

Andre tends to write about emotions and observations derived from the human experience, and Sleep very much started out from that. The hook came first, with the very basic idea of “I’m tired of dealing with the world, I’m going to go back to bed”.  Looking around at the disorder and mania in society can be exhausting, and the lyrics of the chorus essentially touch on being fed up with it all and hoping to “sleep it off” and try again tomorrow.  The verses touch on hypocrisy, narcissism, and other themes that are so prevalent in the new, tech-driven world.  In a society built on empathy and compassion, a lot of technological “advancements” actually distance us from our community and our peers, weakening social bonds and our ability to communicate effectively.

We would do pretty well anything to get in the studio with Grandson (and his producer Boonn), Mike Shinoda (of Linkin Park), Dave Grohl, or Rick Rubin.  All 4 have worked extensively with the same sounds that influence us, and the knowledge (both technical and musical) we could gain from the experience would be invaluable. Plus, they all seem like really cool people and would be really fun to work with.