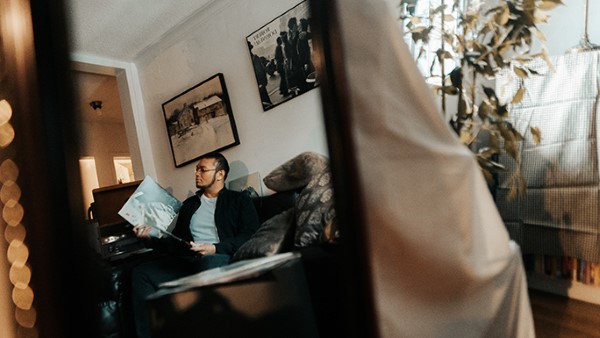 Toronto, ON-based artist Juro Kim Feliz’s synth-pop alter ego Grumpy Kitty Boy has released his new single, “Blue Eyes”, which personifies the plight of people who need to let go of the past, live in the present, and look after themselves further ahead.

With a sentiment surrounding “but who am I? I’ll never know,” Grumpy Kitty Boy’s story surrounds feeling lost while singing about things that “don’t make sense,” Feliz explains. “He seems to suffer from amnesia while living in his ‘Unwanted’ adoption box, and sings about things like the night sky, zodiac signs, shattered TV screens, horizon lines…”

Juxtaposed within a cutesy, video game-esque visual world within the video, these lyrical twists wind to the fact that Grumpy Kitty Boy admits to not seeing reality ahead of him.

“It is therefore not a case of amnesia,” Feliz offers. “He’d rather avoid past lives that now take over his destiny.

“The chorus of ‘Blue Eyes’ came together in my mind while waiting for a bus on a winter day,” the Toronto-based artist continues, recalling. “The exhausting routine of taking 1.5 hour-long commutes to work freezes one’s perception of time and space. You lose control of things as others take the wheel — for better or worse.

“There’s a parallel in the present day as the world continually faces the ongoing pandemic.

“Many of us have probably resigned ourselves into realities in which we feel stuck,” he adds. “Unlike Grumpy Kitty Boy though, I tried taking matters into my own hands instead of losing myself. Years later, I’m now past beyond enduring life in Canada as a foreigner with very few safety nets and privileges. Those imposing ‘Blue Eyes’ keep staring back, though, as if they know something I still don’t.”

Check out the lyric video for “Blues Eyes” below, and find out more about Grumpy Kitty Boy via our mini-interview.

I have many names! I am Juro Kim Feliz, a composer based in Toronto. People normally call me Juro [joo-row], while my family calls me Kim—which is part of my first name, by the way! I used to compose contemporary classical music, but I go by my artist moniker/alter-ego Grumpy Kitty Boy nowadays as I invest my time on my synthpop projects. Besides composing, I also love collecting vinyl records, riding my bike in the city (before the pandemic happened), playing sim computer games like Cities: Skylines, and staying up late nights/early mornings.

Also despite the name, I actually don’t have a cat! I would love to have a real-life grumpy kitty living in their cardboard box here at home.

Tell us about the recording process behind Blue Eyes …?

I remember enduring the commute once from downtown Markham to Scarborough in 2019 because of work. While waiting for the bus on a cold January afternoon, a song verse came forming in my mind. The inspiration came from making up a story where Grumpy Kitty Boy loses his memory. Pushing it further, I imagined that he had a sudden case of amnesia—“Who am I?” he then asks.

Thinking about how past lives can interfere with one’s present and future self, I imagined a pair of intimidating eyes following one’s every move. That’s where the idea of “blue eyes” came from.

However, I left “Blue Eyes” unfinished—it took me four months before going back to it. I struggled to find the right lyrics for the remaining sections once I came back. Mentioning “horizon lines” is always a favourite subject of mine, but talking about “bus rides [killing] dreams for life” perfectly captured what I thought is a brainwashing ordeal that many go through in our daily survival grind. My frequent long bus commutes to work at that time felt like I was gradually losing myself.

I was scheduled that year to do a summer artist residency at the Kimmel Harding Nelson Center for the Arts. I bought an AKG microphone, finished the Toronto premiere of a commissioned musical work I wrote, then flew to Nebraska with my audio gear the very next day. My four-week stay at the KHN Center was inspiring and filled to the brim with work! I recorded the vocals for “Blue Eyes,” along with others that now form part of my upcoming EP (Show Me The Kibbles). Nebraska City is just a small town, and I remember getting annoyed whenever someone decides to mow their lawn as I press the record button!

The most striking 2020 highlight isn’t even an artistic one: I got my Canadian Permanent Resident status in 2020 during the pandemic. It was a huge accomplishment to provide tons of paperwork for it—I even had to submit not less than 10 employment reference letters from all over the place! It felt like recreating and reassembling your life in full colour for the past 10 years. But making matters worse, my legal resident status was also quite in limbo even before submitting my application.

I sometimes wonder how people handle dire situations when their security is on the line. Fears of not getting legal resident status after living in Canada for so many years were all too real. I had already built a life here, and my family came to settle here—will I be suddenly turned down, forced to pack my bags, and thrown out as the pandemic rages on? With the comforts of the first-world privilege being the norm, many might still be oblivious with the precariousness of moving here and fighting for security as an outsider.

I also wonder how Grumpy Kitty Boy himself would face all of that. I know he’s a seasoned pro when it comes to hardships.

Since I switched gears from contemporary classical music to songwriting, 2021 is now all about exploring what Grumpy Kitty Boy can bring! Everything functions remotely now due to the pandemic, so I want to focus on creating and producing as a solo artist without worrying about performing in gigs and such.

After releasing my debut single “Airplane Wings” in 2020, I’m now set to unleash my first EP (Show Me The Kibbles) on February 26. The songs go all the way back to 2018, and the way they came out during unexpected circumstances is very special to me. I created a digital songbook to accompany this release—this compilation contains lead and music sheets of all songs—and I planned a couple of future offshoot projects like a pencil-sketch animated music video and a separate music release of instrumental tracks. I’m quite happy to continue my collaborations with visual artist Yuna Kim and friends from the newly-established studio in Freiburg, Germany named mu-waves (with Marie-Luise Calvero, Sebastián Gómez Mancheno, et al).

I also want to set the wheels rolling for another upcoming EP either at the end of 2021 or in early 2022. I already wrote the songs since 2019—everything’s kinda set in stone early on—and production is currently underway. Quite frankly, this also means I ran out of songs now! I have to go back to my box and write new stuff again for the next big thing.

I recently read Dave Everley’s article on Louder about Porcupine Tree breaking through the prog scene with their album In Absentia. It made me wonder how collaborating with Steven Wilson on an album feels like—I can relate very much to his frustrations and musical aspirations that made him decide to go solo. I like stories that talk about breakthroughs, transitions, the “in-between time” from one space to the next. If I can get a chance, why not work on an album with him?