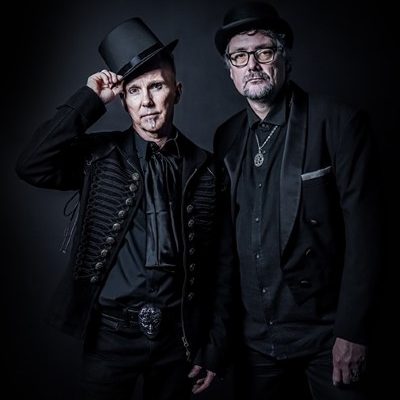 Douglas Von Irvin’s Carnival, or DVIC, is an up-and-coming songwriting collective dedicated to generating feelings and emotion with not only their music but films too. The project was formed by the mysterious lead singer, Von Irvin, and the band’s “spiritual advisor,” Dr. Prycenstein (Dave Pryce).

To kick off the new year, the “Monster Garage Pop” pioneers have just announced the release of their fifth and latest single, “Ultra Man”, along with a music video to accompany the release. The four-minute, 20 second-spanning video extravaganza is a space epic, starring Von Irvin as a lost pilot, and Dr. Prycenstein as his crewmate.

Check out “Ultra Man” below, and find out more about DVIC via our mini-interview.

Douglas Von Irvin’s Carnival, or DVIC. is a songwriting partnership dedicated to generating feelings and emotion with not only our music but in films too. Our project consists of the mysterious lead singer, Douglas Von Irvin, and the band’s “spiritual advisor,” Dr. Prycenstein. We describe our style of music as “Monster Garage Pop”. The “Monster” is about the horror films that Douglas watched as a kid, and sometimes serve as muses when he writes lyrics. The “Garage” is about Dr. Prycenstein’s, mad scientist, no-nonsense, punk/garage rock approach to getting the job done with an ax.

The “Pop” is about the music we make writing our eclectic songs together. Once, an audience member walked up and described to us what he heard coming from the stage., “You guys sound like Roy Orbison and the Cramps had a baby”.

We met in Las Vegas performing with Paul Stanley (Kiss) and Matt Starr (Ace Frehley, Mr. Big). After that weekend in 2019, we stayed in contact and decided to continue writing and performing based on our chemistry.

Tell us about the recording process behind “Ultra Man”?

We had the pleasure of collaborating with Matt Starr as our producer. Douglas wrote the song, then Dave enhanced the lyrics with details to spark the imagination. Matt contributed ideas about arrangements, drums, lyrics and helped bring all of our ideas up to a very powerful level sonically.

For the Ultra Man video, Matt Starr directed, we put ourselves “in character” to allow us to communicate the dichotomy between independence and connectedness. Mission Control being thousands of miles away, from the space traveler, each doing a job independently, but each relying on the other to survive.

After about a year of recording songs and filming videos, it was fun seeing our music, website, and social media launched and shared with the world, and playing a couple shows. The first show in the United States was exciting because we played at The Viper Room in Hollywood.

We will release the “Meet the Monsters” EP after re-releasing some of the songs as singles throughout 2021, including a re-mix of one of the songs.

Currently, we are mixing and recording overdubs for our next 4 EPs with Matt Starr producing, writing, and performing with us again. We have already storyboarded a video for one of the songs that will be filmed in Toronto with Dr. Prycenstein as a Mad Doctor in a lab, and Douglas Von Irvin as a three-headed transplant running around the streets of San Francisco. Before 2021 ends, we would love to perform the live shows that we had to postpone in Europe and Canada.

David Lynch, because of the dual-tone in his work in film and music celebrating the light and dark of the world. Most importantly, we think he’s made some incredible music as a producer and performing. As you listen to the music projects he has produced, it’s hard not to see detailed pictures in your mind. That is exactly what DVIC are up to when the three of us are creating our music and lyrics.