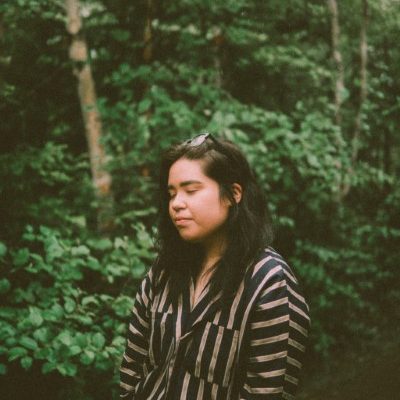 In advance of the festival, we are catching up with some of the talents. First, we spoke with Kristian North, then Yoo Doo Right, Ariane Roy, Sylvie, BAIE, l i l a, Alexiane, and Q052. Now, we’ve caught up with Kanen. Check out the single “Tes veines en canot” below, and find out more about Kanen via our mini-interview.

First of all, would you like to introduce yourself to our readers?

My name is Kanen and I’m a singer-songwriter. I released a mini-ep in 2019 called Karen Pinette-Fontaine. My artist name is simply Karen in my native language, Innu-aimun.

How does it feel to participate in the festival Le Phoque OFF 2021 for the 7th consecutive year?

This is my second PhoqueOFF and this edition makes me particularly happy because I am coming for the first time as Kanen. At my first PhoqueOff, I still presented myself with my full name.

The PhoqueOFF 2021 will be virtual this year, how do you prepare for a virtual festival compared to a classic festival?

At first, I was destabilized when I wasn’t hearing people applaud after my songs. Since then, I prepare myself before a show by telling myself that it’s normal not to have any reaction after my songs or interventions.

What can a person who hasn’t seen you perform live yet expect from the show?

I would say a range of mixed emotions. My songs can be very melancholic or very festive. Also, my interventions can be engaging but there are moments when I have an offbeat tone, it really depends on how I feel after or before a song.

What is your song that you would recommend to a new listener?

I would recommend “Tes veines en canot” because it’s a bilingual song about my nation’s ancestral territory. It sums up my project where I put forward the question of identity that I’m trying to reclaim and my desire to integrate French and Innu-aimun.

Last but not least, how did you demonstrate your creativity during the pandemic?

New songs for a future debut album and a lot of cooking, including banana bread!