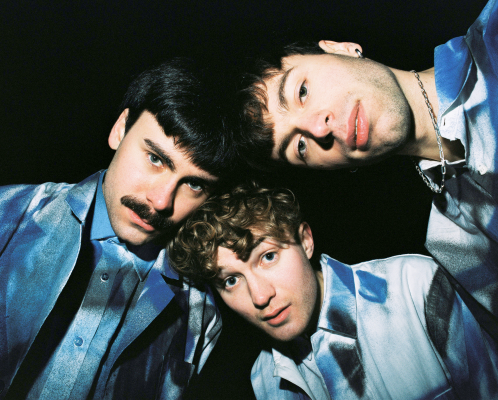 Vancouver-based band daysormay just released their new song “Everything Is Changing”, a vibey Ukulele-based ballad. Daysormay, the English phonetic of the French “désormais” meaning “from now on”, is a trio comprised of Aidan Andrews (Lead Vocals/Guitar/Keys/Ukulele), and brothers Nolan Bassett (Bass/Vocals/Trumpet)  and Carson Bassett (Drums/Percussion). The band initially wrote the song in 2017 while they were on a camping trip post-high school graduation, as they began to dive right into their music careers.

“We had all just graduated high school about a month before, and, even though I knew we were jumping right into music, I still felt like I had just swum over a drop off into the deep end,” said Andrews.

However, the song got tucked away and remained a demo until 2019 when they revisited the recording.  They decided to independently complete the production and mixing in DIY fashion, preserving some of the recordings from the demo.

“We had just become a trio, and everything felt like we were floating over the deep end again. The lyrics really resonated with us, we all just stared at each other after listening to it. It was like we’d written it for our future selves,” he said.

The band has headlined shows like The Reeperbahn Festival in Germany, The Great Escape in England, Bumbershoot in Seattle, and supported slots on stages with Cold War Kids, Tessa Violet, Peach Pit, Walk Off The Earth, and Arkells. They’ve also released an EP, an album, and collaborations with Tessa Violet on “Role Model”. “Everything is Changing” follows their previous singles “Holding My Tongue”, a song about speaking up to advocate for human rights, and “Running”.

Here’s what the band had to say about their new song:

Take us back to the beginning, how did the band meet?

I think we were eight or nine years old. Our parents or mutual friends and we met through cross country skiing, of all things. We were in like the same ski group. We just started hanging out and playing covers. It just kind of worked out that we were all learning instruments at the same time. And they were all instruments that you can make a band out of. It just went from there. We’ve had a couple of different versions of this band but we started officially in 2010. We were 10 or 11. Daysormay started in 2016.

What made you guys want to pursue music?

It’s just really fun to do. We just kind of wanted the ability to be creative and do whatever we wanted. I don’t know if we think of it in that way. We just want to do this as much as we can and if we can make a living off of it, that’d be awesome. It’s a good outlet and a great place to put our energy and focus on.

What’s the story behind daysormay?

We just like the meaning of it in French. It basically means henceforth or from now on. We wanted to make it a bit easier to grasp so we made the spelling more phonetic. It ended up becoming the motto of the band is, to move forward and not get stuck on stuff in the past. It’s a dangerous thing to do with songwriting and to look at what you did in the past that worked and try to replicate that. It’s better to evolve and just try to push forward.

Did your perspective listening to the song after two years change? Did you hear the song differently?

It’s something we’ve been doing a bit more of lately; starting an idea, getting everything out that we have at the time, and then leaving it for a while, and then coming back when it would be totally fresh. We made the demo in 2017 in the summer and we just did everything we could with it until we couldn’t figure out what to do next. We try not to push it too much. We just do everything we can do in the moment when we’re there and then try not to force anything. It went away for two years and then we were digging through demos to make an EP, and it was just in there. We used to be a five-piece band and we had just become a three-piece band. There was just a lot of uncertainty  so the lyrics just resonated with us. It had been so long that I had forgotten that I had written those lyrics and stuff. It was a really cool experience.

What does this song mean to you individually and as a group?

I had just gotten out of high school. I knew that we were doing music but I remember just feeling like I have no idea what to do. I think it was just a way to deal with that. Songwriting has always been an outlet for me to cope. Finishing the song was just another way to cope with all the uncertainty about this new version of the band and what we’re going to do next.

It just felt really reassuring. None of us were going anywhere. We weren’t leaving this. We were just going to stick with it. We didn’t know if it was going to work as a three-piece. It was just a way of reassuring each other that we’re in this for the long run.

What made you want to preserve some of the recordings in the demo?

It’s just hard to replicate the first feeling of the first time you do something like that or the first idea in a song. When we rediscovered it, it just felt right. I didn’t want to touch some parts of it. My voice wasn’t perfectly in tune but the feeling was there, which I think is the most important thing.

What did you add to it?

There was only the chorus, the outro, and the first verse so we had to write a whole second verse and figure out a bridge and more of the instrumentation because at the time it was just like ukulele and vocals.

Is DIY production something daysormay does often?

DIY has kind of been our M.O for most of our career. Most of the songs we’ve been putting out are produced with Steve Bass. But with this one, we kind of knew what to do, and we didn’t feel like we had to go to somebody else for it.

What can fans expect to hear from daysormay this year?

Couple more singles, an EP, or some bigger release. We’re doing a video for every song. Maybe more live stream shows. Right now, we’re just focusing on output and just showing people what we’ve been doing in secret for the past year and a half.