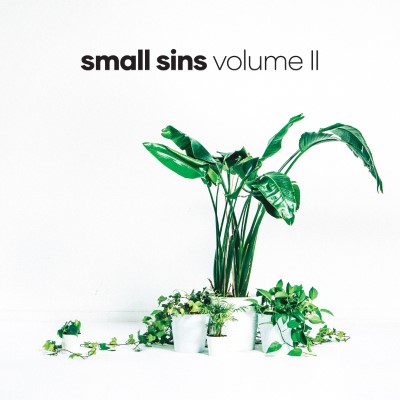 Volume II is the fourth LP from the Toronto based artist, Small Sins.

Volume II is an album that craves your affection, but it is an affection that is well deserved. Overall, the tracks are chill, but upbeat with strong synth baselines on which Small Sins layers arrangements of classic & electronic instruments to create dynamic and complex soundscapes. Similar to the artist, Grandaddy, Small Sins places on top of his intricate accompaniment: muted male vocals and uncomplicated lyrics. The contrast of Small Sins plain voice and uncomplicated words generate a sense of intimacy with listeners to help Small Sins navigate listeners through the more intricate arrangements that lay underneath. The results are that Volume II builds emotional moods that can at once be so fun and cheerful, yet have this edge of palpable sadness and anxiety that make the tracks utterly relatable – that beg for love that is hard to not return. There is an ease to the tracks of Volume II as well, despite all the album seems to juggle, that could only come from Small Sins working as alternatively artist and producer for the past 15 years. As Small Sins’ press notes, Volume II is an album of “synth-driven pop that you could dance to or fall asleep to.”

Standouts tracks on Volume II were “510”, “Jerry & George”, and “Stuck With Each Other”. “510” is the first track on Volume II and is a great opener to the world the listener is about to enter. The song is eminently chill, with enigmatic depths in its accompaniment, yet is still very easy to move your hips to.

“Stuck With Each Other” is one of the few sad tracks on Volume II. There is an irresistible brutality to the honesty in this track. This hard truth starts immediately with the song’s first line as Small Sins admits “I guess I just like writing sad songs,” casting an intriguing shadow of doubt on the authenticity of all of the bouncy, upbeat tracks preceding it – that is not making them less beautiful, but more layered in their emotional complexity. The lyrics then dive further into the previously hinted imposter syndrome as Small Sins infers he is stuck with his lover because no one else could love him, while his lover is only stuck with him out of habit. Small Sins ends the song repeating the lines over and over to beg that his lover be at least not ‘mean’ when they are finally tired of him. It’s an achingly honest portrayal of the artist’s relationships to themselves and others that at least engenders empathy, if not catharsis.