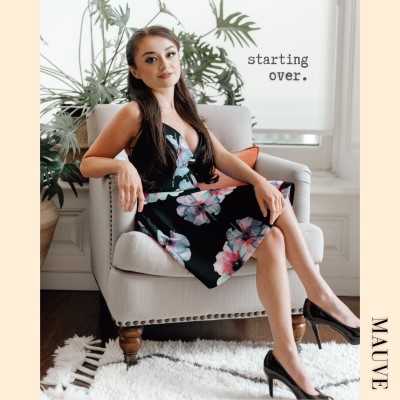 Singer-songstress Mauve is “Starting Over” with her new song release.

The Mississauga-artist released “Starting Over” through Believe Digital as a mid-tempo hopeful and dreamy strong, full of melancholy. Transcending genres to create moving pop songs with elements of R&B and EDM production, anyone who has ever loved anyone will relate to the lyrics about trying your hardest but not knowing if you still have a fight in you. The song was produced by Bogdan Bobrov and vocal producer Jovan Jovanov.

Her influences come from the deep and emotional vocals of Amy Winehouse and Sia. Furthermore, Mauve gives credit to her proximity to Toronto for providing many outlets and opportunities to explore different styles of music through its vibrancy and the diversity of its people.

With over 1.5 million career streams to date, Mauve has won the InterContinental Music Award for “Best of North America-Pop” for her song ‘Come Around’. In addition, Mauve was nominated for “Best New Artist” at the Niagara Music Awards. She has also performed at YOUTH DAY Global at Yonge-Dundas Square.

“Starting Over” is full of catchy melodies and relatable lyrics. What is your songwriting process like?

It happens very organically for me. It first has to begin with something I am going through or inspired by, be it a positive or more difficult circumstance. I can’t really force myself to create a song without being driven by something, so whenever a spark of inspiration comes by, I make sure to work on it to shape it into something tangible. Sometimes if a catchy melody or idea pops into my head at the most random moment, I record a bit of it on my phone so that I can go back to it later without losing it. Once the main structure of the song is complete, I use my software program and MIDI keyboard at home to lay out its components and then send the demo to the producer that I’m collaborating with to professionally record it. It’s so awesome hearing all of the parts gradually come together, as it is a very personal process for me.

What do you think makes “Starting Over” stand out from your other songs?

Most of the songs that I’ve released have come from a place of celebration and falling in love, but this is one of my first songs that explores the pain that can come from losing love. It was a cathartic release to write this song and to string together the words that expressed the hurt that was being experienced. People are going to be able to see a deeper and more melancholic tone from me, that maybe they haven’t seen before, but it’s important for them to see this side of me as well. This song was written out of that frustration of having so much hope for the start of something new, and then realizing that it won’t actually come to fruition. It’s the disappointment that you get all too familiar with in that journey of finding the one for you.

Which artists inspired “Starting Over” the most sonically and lyrically?

I’ve always been drawn to those artists who don’t hold back and just belt it out. Amy Winehouse came to my mind when writing the lyrics for this song. She dug in deep when she was writing about heartache, and also combined a sense of wit when reflecting back on the troubling things she went through. Production-wise I wanted the song to follow a similar vibe to “Consequences” by Camila Cabello, which is a breakup ballad featuring orchestral instruments combined with electro-pop elements.

How has the pandemic impacted your approach to writing music?

Even though it’s been really strange not being able to perform any live music or to rehearse for shows with my band, I’ve been finding this as a very beneficial creation period. I have been writing probably one song per week and have been collaborating with new producers virtually. I most likely would not have been able to do that without the pandemic. I feel like I have really been refining my songwriting skills during this time. I don’t allow myself to get bored because there are so many opportunities now to move forward and grow as an artist. This can be by spending more time playing guitar, trying different vocal techniques, or forming a new melody on the piano. The worst thing is to feel rushed when creating something, but the pressure has been lifted so that I can really take the time to develop a musical project and to feel what I connect with most as a singer.

What effect do you hope your song will have on your audience?

I hope this song allows people going through this kind of heartache to release those emotions and know that they aren’t the only ones who have gone through this lonely feeling. I think a lot of people can relate to this feeling because sometimes we can get ahead of ourselves and picture a great life with someone, without fully considering what that person’s real intentions are. I hope that people are able to know that it is okay to stay in those sad feelings for a little while because then you are able to process it and grow stronger.

The goal in 2021 is to continue making an impact and growing as an artist. I plan to finish recording several new songs so that I will have a complete collection to release my second EP or an album in the summer. I am excited to release a music video for my song “Starting Over”, and I also have a few virtual performances lined up over the next couple of months.