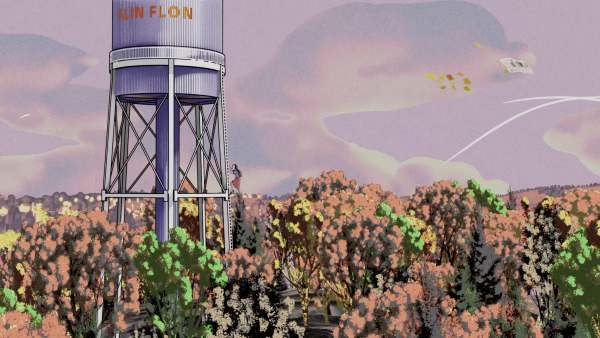 Manitoba-based music act Bluebloods has unveiled a music video entitled, “Postcard from a Quarantined Miner in Flin Flon”. It revolves around isolated Flin Flon miner, Louise, as she pens a love letter to her Winnipeg-based partner, Abe. Using animation, live-action, and song, Postcard explores parallels between Manitoba’s crises of today and yesteryear and how remote lovers have stayed in touch during such episodes.

With the real-life impending closure of its 777 mine, the northern community of Flin Flon faces an uncertain future by many accounts. Its storied history is nevertheless filled with somewhat under-appreciated, if not unsung, glories. One tribute to this history is the 1960s-era tune The Ballad of Flintabbatey Flonatin, whose melody makes a cameo in Postcard.

Conrad is grateful for the permission of its composer, former Flin Flon resident, and nonagenarian Jack Shiffman. He’s also grateful for the guidance of The Flin Flon Heritage Project, which in so many ways helped with archival research in support of this project, and for the support of the Canada Council for the Arts and Manitoba Film and Music.

Check out the video below, and stay up to date with Bluebloods via their socials.