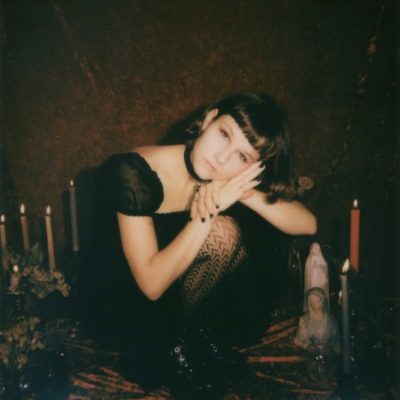 In advance of the festival, we are catching up with some of the talents. First, we spoke with Kristian North, then Yoo Doo Right, Ariane Roy, Sylvie, and BAIE. Now, we’ve caught up with l i l a. Check out their latest video for “past & present” below, and find out more about l i l a via our mini-interview.

I am l i l a and I am a singer/songwriter/artist from Quebec City.

I’d say my music is a mood, a small gesture, or a fragile sound, but I guess you could call it ethereal dream pop or something like that.

I love everything that is art and I also draw and write poetry (mostly in french).

How does it feel to be a part of Le Phoque OFF 2021 festival on its 7th consecutive year?

To be honest, it feels kind of unreal that it is actually happening, seeing the pandemic situation that’s happening right now!

I really thought it wasn’t gonna happen because of the government’s sanitary rules and stuff and I was really sad, but when they said it could go on (in an online form, obviously) I was so glad and relieved. I think all the Festival team and the other artists were too! It is my second time playing in 3 years, but let’s say this year is slightly different than last time, haha. I’m excited! it’s a very cool Festival to discover new artists.

Le Phoque OFF 2021 will be going virtual this year, how do you prepare for a virtual festival compared to a standard festival?

The performance was live filmed already. It wasn’t touched, arranged, or modified in any way though so it truly is as if I were playing the show live for the online audience. When it’s going to play on Feb.16th I am going to be seeing and hearing it for the first time alongside the audience. I will be « there » to live chat with people if they want. I definitely don’t know how to prepare for that, must admit! For the show itself, I must say that I was kinda nervous, which I usually am not. I was never « live filmed » in that kind of performance. The preparing process was pretty similar to what I would do for a standard festival, I’d say. I had rehearsed with my musicians a few days prior and so we were technically ready, but also who is and knows how to be ready in 2021 anymore?!

My performances are always all about ambiance. I play my songs, yes, but I always try to bring more to it with lights and mysterious noises (such as a tape player) or poetry between songs. For this performance, it’s going to be a little bit different because I didn’t have the time and space to install a little setup like I usually do. It was filmed, I had no control over the lighting and the cameras and we also only had a certain amount of time to wrap up the whole thing so! It is a 20 minutes performance, but I think people will still be pretty pleased and intrigued by it (i hope)! I carefully selected four of my [new] songs that really showcase the different vibes of l i l a. I think the music will/speaks for itself and I believe people can expect to be comforted and warmed by it. We all need this right now, don’t we?

What song of yours would you recommend a new listener check out?

I was going to say a song from my new EP, but it’s not out yet, oops!

So I think that either [science of fish] or [great drama] would be a great song to start with.

I must be honest, this pandemic hasn’t been the easiest and best time creatively for me [especially musically]. I get a LOT of my inspiration from going to see dance shows, art shows and plays so everything being canceled has really cut me short on the creative side. It is really hard to find a purpose in those weird times and I think I had to do a lot of « letting go » in order to go on and accept the situation.

Hopefully, I also do visual arts [drawing] and so I think I have turned to it now more than ever and I started hand painting shirts and tote bags that I sell on my Instagram [from time to time, when a batch is ready]. It’s been going pretty good so I am very pleased and motivated about that!

I have also started working on the visuals for my new EP [it’s supposed to come out in the spring] and I’ve also had the chance to (re)play a few shows so stuff is slowly starting to get a little bit « exciting again »!