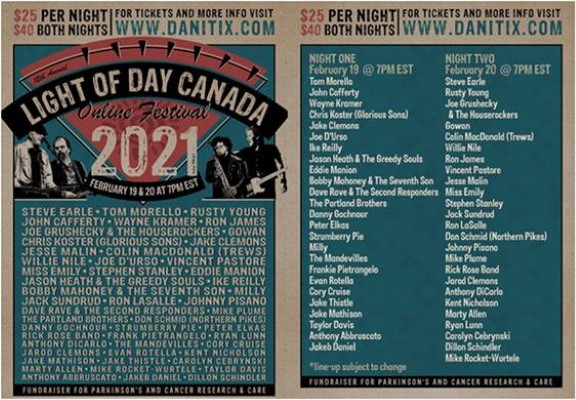 Tom Morello, Steve Earle, Jake Clemons, Ron James, Wayne Kramer, and Rusty Young are just a few of the amazing artists set to take centre screen this month for the 12th Annual Light of Day Canada Online Festival scheduled for February 19th and 20th, 2021. This year’s online edition will have over 50 artists sharing their music and talent.

In its continued effort to raise funds for Parkinson’s disease and cancer research and care, Light of Day Canada will host a stand-out series of musicians starting at 7:00 pm EST both evenings (February 19th and 20th). Tickets are $25.00 per night or $40.00 for both nights. You can purchase your tickets right here.

After postponing 2020’s arena show with Canada’s Tim Hicks this past November, the Light of Day Canada team wanted to do something to keep moving forward. “We decided to do a virtual show with a mix of live and pre-recorded performances” Light of Day Canada President Dave Rotella shares. “The response by the artists was so positive and overwhelming, that’s what led to adding a second night.”

“Our first show in 2007 was at the old NFCVI auditorium in Niagara Falls” Rotella recalls. “While the shows have grown since then, our main goal has always been the same: to raise money for Parkinson’s disease and cancer, for both research and care. Together, we can all play a role in raising awareness and funds to assist those living with Parkinson’s and cancer, and to one day eradicate these horrific diseases. We thank our communities, our artists, and our volunteers for all of their support over the years!”

In partnership with the Light of Day Foundation, the Light of Day Canada Foundation for Parkinson’s Research and Care is a Canada Not-for-Profit Corporation that began in 2007 with two modest shows, one held in Niagara Falls and one held in Toronto. The success of the shows and the enthusiasm and support of the two communities helped expand the show to larger venues and eventually to Hamilton, Halifax, Kingston, London, and now online.

As a result, the annual series of concerts have raised over $500,000 for Parkinson’s Research and Care distributing all of our profits over the years to Parkinson’s Canada, Light of Day Foundation (New Jersey), and most recently to the London Health Sciences Movement Disorder Centre, Queen’s University Neuroscience Studies in Kingston, the Steve Ludzik Parkinson’s Rehab Clinic at Hotel Dieu Shaver Hospital in St. Catharines ON, and now the Walker Cancer Clinic in support of the Niagara Health Foundation.

The Light of Day Canada event starts at 7:00 pm EST both evenings (February 19th and 20th). Tickets are $25.00 per night or $40.00 for both nights. You can purchase your tickets to this exciting virtual event right here.