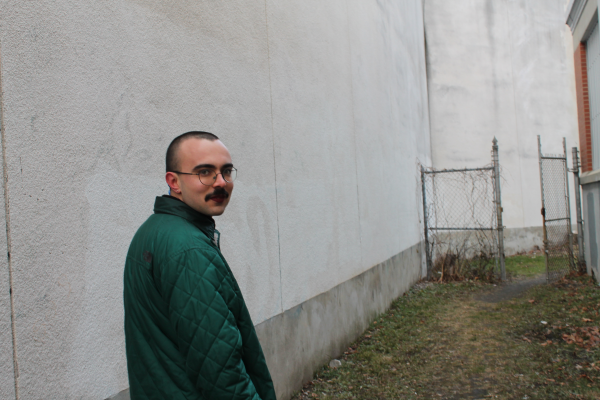 Montreal, QC-based Simon Provencher has released his brand new single, “Choix Multiples” from his upcoming EP, Mesures to be released on March 26, 2021, via Michel Records.

“Choix Multiples” evolves around the constant staggered guitar looping and the unstabled harmonics.

“The song, written in three parts, spends all of its energy and volume in its first minute as the overwhelming percussion of Olivier Fairfield obscures the hypnotic guitars and diffuse clarinet lines played by Elyze Venne-Deshaies.” Provencher explains about the song. “In the second section, prepared guitars ring out oblique reverberations as if played in reverse while the drums finally tire down and relent, giving way to cymbal resonances and subtle overtones. The song ends on a complex interplay between clarinet, cymbals, and guitar, slowly and windingly deflating until complete silence. The title (translated: Multiple choices) is a direct reference to the four clarinet parts that share the melody through the stereo field but also evokes the possibilities of artistic creation.”

Check out the single below, and find out more about Simon via our Five Questions With segment.

I’m a composer and musician based in Hull, Qc, but I’m originally from Quebec City, where I’ve been playing guitar in various bands since 2012, most notably in no-wave inspired trio VICTIME.

Moving here in the sweet pre-pandemic bliss of September 2019 had me gathering together all of my scattered, loaned and almost-lost music gear and finally patching everything together into something resembling a home studio. With off-time on my hand as the pandemic grew louder, it was only logical for me to try and get serious about recording solo material and distanced collaborative music. I’ve been “bouncing” files with a few musicians and it has been an enlightening experience to write and approach music without being in the same room as the other musicians.

I’ve always been into recording and sound, either as the improvised engineer for my various no-budget DIY bands or as a very unlucrative side-gig. My off-time is usually spent tinkering with pedals, trying to code buggy VST effects, or jamming screwdrivers between my guitar’s strings.

Even though recording and computer work has been my focus lately, bands and collaborative music are still an important thing for me. VICTIME has had a few shows over the summer, I will (someday) play live again with an exciting new project called TDA and I have an upcoming collaborative album with Fet. Nat’s Olivier Fairfield, who also plays drums on my upcoming solo release, Mesures.

I approach music with a lot of focus on sound and texture. What brought me to noisy rock and post-punk in the first place was the energy and ever-evolving texture of noise and distortion; the unprevisibility of it all still has a magic that I don’t find anywhere else.

I feel like I’m at a point where I am ready to branch out as a musician, out of the traditional 3/4-piece rock band and into more experimental and exploratory territory. I have been working on my improvisation skills and I have been expanding my musical vocabulary. It may seem trivial, but I bought a Bass VI that I modified and tinkered with a lot and it has become my main instrument. I also have been working with feedback loops and various means of no-input noise-making to spice up compositions and add more depth to my approach to sound.

I am also, somewhat paradoxically, way more interested in acoustic instruments than before. As an electric guitarist, it was always easy to stomp on a pedal and get a different sound instantaneously. Focusing on “raw” instrument sounds has been a very rewarding exploration into subtlety, micro-movements, and the overall “experience” of playing an instrument.

Even though time has seemed unending at several moments, looking back on the last year, I have done quite a lot during the pandemic. The two aforementioned records being the most notable and the most time-intensive. I have recorded a lot of material that is now waiting to be cobbled together into something cohesive.

I am also learning to code audio effects and processors, in hope of releasing open-source plugins somewhere in the distant future. Coding isn’t (always) the most creative thing to do, but it puts me in a similar mindspace than working on music, so I guess it counts.

If you were to suggest one of your songs for someone to hear, which one?

Right now, there is only one song off my upcoming EP that is released, it’s called Choix Multiples. This answer isn’t a cop-out though, I do feel like it represents quite well what I’ve been doing musically lately. It’s a swirling mix of out-of-tune guitars, overactive drums, and fleeting clarinet lines (spectacularly played by Montreal-based Elyze Venne-Deshaies). Listeners are free to disagree, but I think that it finds a good balance between accessibility and experimentation, busy and free-form but still somewhat soft and comforting. I think it’s a good song :).

Montreal pop outfit Freelove Fenner have a new album out that is spectacular, both in sounds and songwriting. In a kinda similar vibe, I also keep coming back to the simple, yet so effective sound of Brave Radar. Fet.Nat is always a favorite, so is related project H. de Heutz. On the more ambient side of things, I’ve been listening to a lot of Kara-Lys Coverdale and N Nao, especially her collaborative efforts with Joni Void, beautiful stuff.