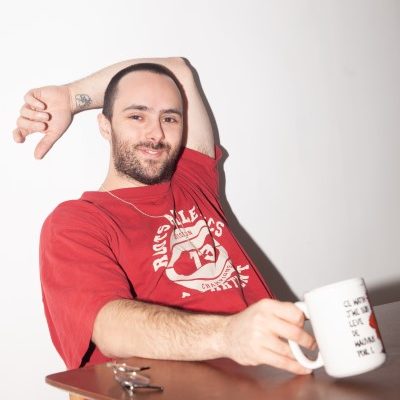 Up-and-comer to Montreal’s local indie-pop scene, Etienne Dufresne is following up on his last release, “Les Couteaux” with the brand new single, “Jolicoeur”. The single could be described as a sort of offbeat modern blues, a cinematographic and poetic boy meets girl fiction tale with a little Twin Peaks vibe.

The very original lo-fi graphic video was directed by Dufresne in collaboration with Martin Paré and Rose Côté, is filled with archaïc 3D images, an hommage to all of those 90’s video game (like GoldenEye or Tomb Raider) and tells the story of this broken-hearted boy chasing the girl of his dream in a small town where nothing really happens.

Check out the video below, and find out more about Etienne via our Five Questions With segment.

My name is Etienne Dufresne better known as the musical artist Etienne Dufresne. I like to think of myself as a visual artist who has finally given himself the right to stumble into writing and recording music after years of gravitating around the Montreal indie scene.

I love contrasts in music and so I tend to write minimal and straightforward 3 minutes electro-pop songs about contemporary issues of our generation such as romantic disillusions, fear of intimacy, and the overall feeling of being bored with yourself and everything in between. Although I didn’t have a proper musical education, I grew up listening and studying 20 minutes progressive rock songs with my dad and more mellow-oriented 70’s folk music with my mom. I wouldn’t dare to say that I have ever been close to replicating one or the other yet, but hey, there might be an influence there somewhere?

For the past few months, I have mostly been downloading and erasing fitness apps from my phone. I suddenly had plenty of time on my hands and thought the right thing to do was to record my first LP. Like a lot of people, I have been feeling a bit nostalgic and bored so I enjoyed relearning 3D animation in order to create this new music video for «Jolicoeur» which I am really proud of. Oh and I’ve tried doing online therapy too.

I think «Fantômes» is a good place to start. It is a pop song with some twisted ingredients in it. Also, it talks about dealing with your own inner demons, which I think everyone is probably doing right now.