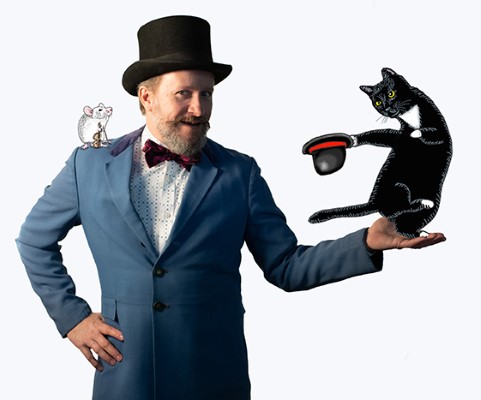 “‘Little White Paws’ describes each of the characters in Unusual Friendships and gives the listeners the basic facts to what they are about to embark on,” Culleton shares of the song in its relation to the album. “This first song is sort of a preface to the full story.”

The mixed media album is based on the children’s story Unusual Friendships: A Little Black Cat and a Little White Rat, written by the award-winning Métis author Beatrice Mosionier — who is also Culleton’s aunt; the 71-year-old novelist wrote the rhyme-heavy book as symbolism for difficulties Métis persons experience.

Touched by the story, Culleton decided to take his own shot at Unusual Friendships — but from a sonic approach. Though he breathed new life into the classic Canadian tale by recording an entire concept album based around it alone, just that didn’t seem to be enough for the contemporary multimedia artist.

As his first-ever children’s album, the Winnipeg-based artist made it his mission to ensure his listeners — whether kids or adults — could be fully-immersed into the musical adaptation. How did he do it, some might ask? Well, he partnered up with an augmented reality (AR) company by the name of Artivive to help turn the exciting listening experience into a wondrous animated experience.

For the full multimedia experience, all listeners have to do is download the Artitive app on their smartphones or tablets and scan Culleton’s latest album cover and bring it to life with the vivid and spectacular, music-backed animations illustrated by James and his 13-year-old daughter Mae Culleton.

“The illustrations are the beginnings to a new version of the book, Unusual Friendships,” Culleton shares. “I wanted the animals to still be animals, but appear to play instruments, and dance and jig.

“Making the illustrations for the album took lots of time,” he continues, recalling the process. “I redrew the cats several times in trying to give them the right personality. ‘Little White Paws’ is based on a cat my Aunt had named Buddy, and the dog in the story is visually based on my dog, Clara.”

Watch the video for “Little White Paws” below, and stay up to date with James via his socials.