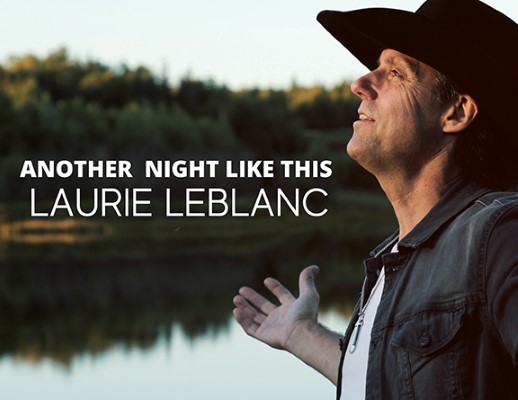 New Brunswick-based singer-songwriter, Laurie LeBlanc is back with his new single, “Another Night Like This”.

“Imagine a warm summer night, the kind when fireworks and butterflies are ever so present, and you just don’t want it to end,” the Bouctouche, New Brunswick-based artist muses. “It may be your first love, or it may be ‘the one’…

“And if we’re lucky, it happens to us once in our lifetime.”

Inspired to push his desire to write in English — and with a loving nudge from his wife and manager, Jeannette, with whom he also co-created another single on the album with, “All In” — When It’s Right It’s Right is LeBlanc’s second all-English release to date. Previous albums include Couleurs (2018), 20 (2015), Noël de la Pitoune (2014), Noir et Blanc (2012), La Pitoune (2010), and his initial all-English release, Influences (2013).

“She wanted me to record an English album for a while,” he explains. “I needed to step out of my comfort zone, and it turned out to be a truly gratifying experience.”

“Another Night Like This” was an instant contender when narrowing When It’s Right It’s Right down to its final track listing.

“I loved this song from the first moment I heard it,” LeBlanc recalls. “The writer’s description of a magical night between two lovers, blended with a sexy, laid-back energy? I knew right away it would be a cut on the album.

“I wanted this album to have a diverse sound, but it’s also important to me to make people happy through my music,” he continues. “If I can connect with a song, then hopefully other people will too.”

Check out the video for “Another Night Like This” below, and find out more about Laurie via our mini-interview.

I was born in Shemogue, NB, a little French community about 1 hour from the PEI Confederation Bridge. Before reaching my teens, we moved… even our house was hauled to Bouctouche NB, where my mother was born and raised. Even though I wasn’t crazy about the idea, I soon realized it was the “Right” move… “When It’s Right It’s Right!” This small town of 2,361 citizens is where I met my wife of 20 years and brother-in-law who would convince me to sing. Being a shy teenager, I didn’t plan on a musical career so, after graduation, I took a Civil Engineering course; and worked 15 years in the field before starting my own design company.

Every time I had the chance to be alone, I would sing… in the car, in the shower, at home… until July 22, 1995, I agreed to sing at my sister-in-law’s wedding – my first public performance. I instantly was hooked and started my first band “Interstate” – we sang covers from the ’90s from Alan Jackson to Randy Travis.

In 1999, I started to sing in French with a group that I co-founded named Zarico – we recorded two albums, original French material which I mostly wrote. My biggest highlight with this group was back in 2006, I was thrilled to open for my biggest country influences Alan Jackson and Brooks & Dunn at the Country Rocks the Hill Concert in Moncton, NB.

After the dissolution of the band, I started writing songs; and in 2010, I recorded my first solo album. I have since recorded seven studio albums : four in French, one Christmas album and two in English including “Influences” which I recorded in Nashville Tennessee and my latest one “When It’s Right It’s Right” produced by multi-award winner Jason Barry.

In 2020, I celebrated a decade of success as a Country Music Singer-Songwriter. The best part of this, is I get to share this amazing journey with my wife Jeannette, who is my full-time manager. Together we have traveled from Coast to Coast in Canada, Nashville, TN, and Europe for different musical projects.
Yup, my love for country music started when I was 16 in my father’s Toyota Corolla signing with a cranked-up Randy Travis’s “Storms of Life” cd. I’ve been singing country music ever since.

Tell us about the recording process behind “Another Night Like This”?

It all started when I got a bunch of studio demos for the album “When It’s Right It’s Right”. I actually received 80 songs from Dave Tough, a songwriter in Nashville, TN.

As I was listening – some for a few seconds, some a little longer – I got to “Another Night Like This.” I listened to the whole track…. and then again. I liked the intro, the laid-back mid-tempo sexy feel, the well-told story of a magical night between two lovers, I knew right away it would be a cut on our new record, and at that very moment, I thought to myself…. we might even have a single here. Of course, you only know these things for sure when you’re in the studio and you hear the final recorded version of the song.

I was fortunate to be working with multi-award winner Jason Barry who produced the song and the album, and I was lucky to work with Dean Brody’s touring musicians who came all the way from Ontario. We spent three days at The Barrytone Studios in Miramichi, NB. With everyone’s magic touch, the track came out great. So here we are today talking about the release of “Another Night Like This.” Hope you all like it!

I have a habit of writing down all my magic moments as they happen; and at the end of the year, I review my list. It’s a great way to motivate ourselves.

After going thru the list, I’d have to say I had great highlights in 2020.

The one that stands out in my professional career was the release of my new album “When It’s Right It’s Right” on June 06. Doing an official album launch LIVE with my awesome band at the legendary Capitol Theater in Moncton, NB was so much fun. We hadn’t seen each other for three months because of the pandemic, so even though we were playing for an empty theatre, we had a blast making music for thousands of people who were watching virtually from everywhere.

As far as my personal life, it was definitely the construction of our family cabin in the woods on my father-in-law’s land. It’s such a magical moment to know that the whole family can enjoy this sweet little place in nature’s country. Learning how to cook a great filet mignon steak and BBQ ribs from my friend chef Gilles Gauthier was very close though.

Besides touring again – which I doubt is going to happen this year with the pandemic – we want to promote this new album and wish for new development in the English industry.

We are also doing a lot of songwriting and hope to be able to book dates at the studio to record some new stuff sometime this year.

I’m listening to a lot of country music on radio and streaming platforms, and there are some great Canadian Artists out there with great diversity in their music.
It would be nice to collaborate with different Country Artists and even different genres of music too. I found it interesting and enriching to have different styles and vocal tones on a song!

If I’m allowed to dream a little, I would definitely love to collaborate with two of my younger day influences Alan Jackson and/or George Strait.
As far as Canadian artists Tenille Arts, Dean Brody, Gord Banford, Terry Clark just to name a few.