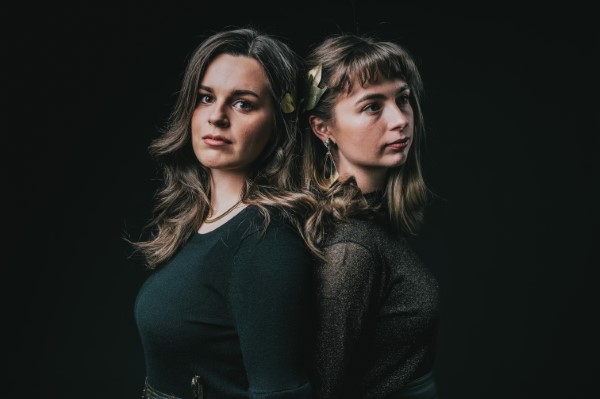 With their sophomore release Victory, Saskatchewan-based Jay & Jo create an ambient, angelic, ASMR inducing mix of roots, folk, and country with tenderly strong vocals and an over-all sophistication that Joni Mitchell teaming up with First Aid Kit would be honoured to cover.

It’s taken me a long time to write this review.  Time not just in the sense of the hours it takes (which it does), not just in the span of time it has taken from first being asked (sorry again Jay & Jo Team!), or the time spent procrastinating about sitting down to write (which is hefty in itself).  Most of my time has been spent internalizing and interpreting and involving myself with this record, a record which has touched and moved me in ways that no other album has in years; I’ve spent so much time thinking about the album, I didn’t know how to write about it.

As someone who is a born collector of music, books, comics, and art, I find the more I want an item, the more I talk myself out of getting it.  I realize the counter-intuitiveness I am describing, yet this is my mindset; why would I save up for that special item I really want when I can amass more, lesser important items cheaper, and deny myself the item I truly want as though, somehow, I don’t deserve it?

Jay & Jo’s angelic and ethereal sophomore album Victory became a rare item that, somehow, I felt like I didn’t deserve.  My initial reaction, and contact to this album, was surprising and striking, and sublime; I was emotionally moved in a way that now I have to attempt to put it into words.

In reviewing their last album Grounded and Light, a well-trusted, talented, and devastatingly handsome reviewer wrote, “Jay & Jo (Janaya and Jolissa Trudel) are a vibrant, dynamic sister duo settled in the heart of the Saskatchewan prairies creating an organic, truly honest sound with sparkling harmonies, tasteful musicianship with a lyrically keen introspective, yet outwardly observing eye.”  (Yes, that was me.)

I had a framework, a schema, a place to start aurally in my mind, so was looking forward to hearing what a couple of years of writing and musical growth could bring to the sounds and songs of Victory.   My preconception going in would be another wonderfully produced record by Hal Schrenk highlighting the honest and heartwarming songwriting of Jay & Jo.

I headed out for a walk with my headphones in, as is my routine, to have my inaugural listen – of what would be many – to warm up my ears and prepare my reviewer mindset to listen critically.  I nonchalantly scrolled through the tracklisting to get an idea of the listening time, number of tracks, and a quick idea of the song titles.

The album’s opener “Inspace” musically displays a subtle mix of honesty and depth, an ongoing theme persisting through the record, as I will discover.  The word “Inspace” strikes me at first glance, an original outlier among other song titles such as “Youth” or “Wheat & Weeds”.

Is it a play on words on “escape” where one is trying to “escape” life by looking “inward”?  Or is it the opposite word choices of “outside” where going “into the landscape” one finds their freedom?

(Upon a re-read, it turns out I missed the title “Inscape”, displaying the unique nature of a person or object in a work of art, as “Inspace.”   My bad, but did it ever get me thinking!  Also, an important reminder to be a careful reader…)

There is a thread of nature-related song titles such as “Wheat and Weeds”, “False-Bottomed World” and “Grand Canyon” though, as also growing up on the prairies as Jay & Jo, isn’t terribly surprising to write about what you know such as lifestyle, social standing, and personal surroundings.

I press play and prepare for a combination of either acoustic guitars, a vocal duet, a jaunty/folky band intro, or all of the above.  Instead, I am met with a breath.  A single, diminutive yet powerful, breath.

The heartbreakingly beautiful vocal harmonies of Jay & Jo are interrupted as I got back and listen to the breath over again.  And again.

What is the meaning of this breath? At first listen it is a sign of Jay & Jo preparing themselves for the song they are about to sing as they know the emotional toll it will require of them.  Or is it a sigh of slight defeat with its downward motion and tone?

Or is it a sigh of relief this story is finally going to be lifted from their collected consciousness? Or is it a preparatory breath from a conductor setting tempo and mood so the ensemble and audience alike know when the song is going to start? Or is it the metaphorical “breath of life” shared by cultures throughout history explaining life’s creation?

Either way, with this solitary breath, there is this moment of space, a moment of created sacred space, an introduction to include the listener to the imminent experience, to subtly set a tone of when everything is going to begin, to brace themselves.

When I allow myself to get past the initial “sacred breath” of the album, I am simultaneously warmed and warned by the vocal introduction, beautiful heartbreaking harmonies singing “it’s a mess in here / we need a new Reinassance in here.”   The opening lines of “Inscape” display the over-all strength of Victory, Jay & Jo’s ability to create music that is both humbled and haunted, heart-warming and heart-breaking.

The “Inscape” refrain “let’s build something better” helps the song subtly build from its initial sweet-stoicism to conclude as a close-to-the-heart call-to-arms.  As I listen through Victory, I am carried on its winding, unexpected changing waters journey such as the eased-paced “Vineyard Man” (that includes a “dragon it steals in the night”); the breezily jaunty “Youth”; the dramatic and powerful “Wheat and Weeds; the tear-inducing “Ought to Be Loved”; the uplifting, rhythmic and anthemic “Victory”; the tragically introspective “False-Bottomed World”; the uplifting, clear picking “Safe In the Waves.”

My journey brought me to the opening organ swell of “Grand Canyon” an enduring reflection on spirituality, loneliness, wanting, disappointment, and the general longings of life.  The opening lines discuss how the narrator if given the chance to stand at the Grand Canyon, “would probably feel right at home /standing before that hollowed out dominion / maybe I wouldn’t feel so alone.”  The lament continues how “it isn’t fun to be hollowed out / and long to see Your face” with a turn of hope to “I’m holding out for a rolling river / to one day flood this place.”  “Grand Canyon” is an honest, earnest depiction of knowing the loss of wonder and questioning one’s place.

As is a common theme of Victory, the dichotomy of ease and tension, of haunting and humbling, Jay & Jo set up this narrative emotional “problem” that needs to be solved.  Much like a Shakespearean sonnet, where the first four quatrains set up the “problem” that the narrative “solves” in the remaining couplet, Jay & Jo finish with the narrator waiting “in this Grand Canyon / until you fill me in” where, at last, with humility and grace, the elegant and hopeful refrain begins: “I will be filled in.”

I’m walking in the park in the middle afternoon with involuntary tears rolling down my face attempting to hold my composure around the other nature goers.  “Grand Canyon” strikes the same chord with me every time I hear it, even now, the understanding of life’s disappointments and acknowledging, even when feeling “hollowed out”, one can eventually be, and certainly be, “filled in.”  “Grand Canyon” is an achingly beautiful and earnestly uplifting ending to the listener’s journey.

Throughout my entire first listen of Victory, I realized I had goosebumps on my arms from track to track being my first real ASMR (Autonomous Sensory Median Response where listeners have physical tingling sensations to outward stimuli) experience.  Was it the weather?  Is there a breeze I hadn’t noticed?  I listen to Victory a second time and the exact reaction happened, goosebumps from track to track.

I could have written a review about the stylish and stylish production by Hal Shrenk (which it is), the tasteful, well-placed performances of the studio musicians (which they are), and the well-paced continuity of the track listing (which, again, it is).  I choose this review / personal essay as means to explain my reaction to Victory and, in a way, discuss the connections music can still create in listeners; living in an uncertain and confusing time in history, it is comforting to know art can continually soothe, uplift and inspire.

For full transparency, I acknowledge that not every listener will have the same experience and I run the risk of over-selling Victory for new listeners, much like one reads amazing reviews for an upcoming movie and then is spoiled with their viewing experience.  Listen to Victory in the spirit of Ralph Waldo Emerson who notably said, “Nothing is at last sacred but the integrity of your own mind.”

I am, in my not very humble way, hoping to explain the experience I had with this remarkable record.  It is part of my regular rotation and has become the accompanying music to many new cherished memories and meaningful personal experiences.

Art, like most things we learn in songs as small children, is better shared, as “love is something when you give it away”.  Thank you for sharing, Jay & Jo.

Victory is a record everyone truly deserves.