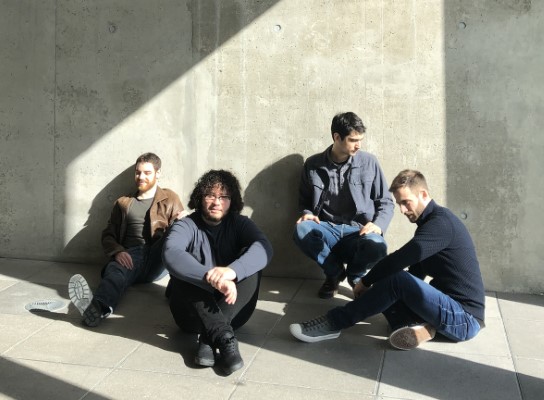 Toronto, ON-based alternative rock band, Carbon Memory has teamed up with us, at Canadian Beats, to unveil a live video for their unreleased track, “Distance”, which was shot at Toronto’s iconic Opera House. Produced by NEONCTZN’s Jamie Phong, the video captures the band’s set opener on March 15, 2019.

The video teases the new musical direction of the band’s upcoming EP, Tourist, recorded and produced by Graham Walsh (Holy Fu*k, Alvvays, METZ) over the summer of 2020. “Distance” mixes shoe-gaze and krautrock, while thematically touching upon negotiating and experiencing “distance” from loved ones, collective experiences, and community. This live rendition of “Distance” hopes to capture a glimpse of what the band and their peers have sorely missed throughout the past year – the special experience of live music. Carbon Memory’s Tourist is set to be released in mid-2021.

Check out the video below, and find out more about Carbon Memory via our Five Questions With segment.

We are Carbon Memory, a four-piece Alt-Rock band from Toronto. The band’s founding duo Demian (lead guitars, piano) and Dennis (vocals, guitars) met in a University archaeology class, undoubtedly making its mark on the band’s name. We came from different musical tastes and approaches in songwriting ranging from ambient post-rock to stripped-down folk. We then met our drummer, Simon, and bassist, Andy, both Humber Jazz graduates, who sprinkled that magic jazz touch into the mix. Finding a common ground in each other’s styles took a bit of time, but that variety has made it really interesting and exciting for the band.

We tend to gravitate towards music that is dynamic and cinematic. In this way, we set the mood to our songs with synth and ambient guitar textures and use guitars, vocals, and rhythms to articulate the song’s meaning more directly. We like to create music that is immersive and introspective. When it comes to songwriting, we don’t consciously set any predefined genre, moods, or fast or slow tempos to songs. If we were to reflect on our tendencies, we generally come upon songs in two different ways. This probably explains why some of the songs turn out being so different from each other. The first would involve a guitar or piano, sketching out some chords that we are vibing with and experimenting with vocal melodies and scratch lyrics that may not make any sense at first. Quite often, some subconscious theme starts to present itself both musically and lyrically, with a few words or progressions that may unlock the mood and theme of the song. The second would start from a more textural/soundscape perspective, where we build the world and its sounds, within which we have to find ourselves or our narrative. That being said, we generally come up with the music first.

We were fortunate enough to gig across Southern Ontario throughout a lot of 2019. This helped inspire new creative ideas and give us a better sense of where we wanted to go next. This was a blessing in disguise because once the pandemic hit, we had already built the framework to what would become our next record. In this way, we’d say goal-setting and structure was important in keeping our creativity focused. With so much time spent at home, we have been reading a lot, cooking, and just making things. For example, we’ve been illustrating and animating our own music video, which has been challenging yet super fun. Working and collaborating with other creators has also sparked creativity, luckily, we were able to work with engineer and producer Graham Walsh on our upcoming EP, Tourist.

We would love to suggest something off our upcoming EP, as we feel those songs best reflect what sounds and influences are most contemporary to the band’s songwriting at the moment. However, we think that our live at the Opera House video gives a good taste of what we’ve got in store.