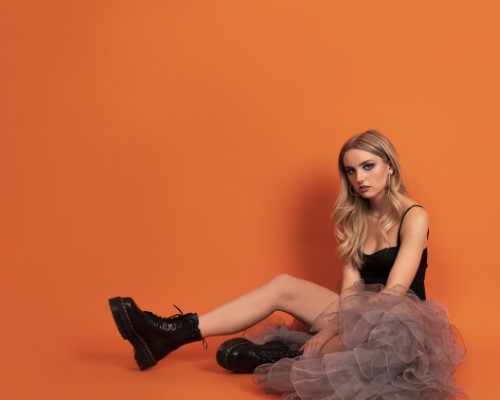 From becoming a performer at the age of 9 to growing into a full-fledged songwriter and pop-recording artist, Vancouver’s RAYNE has drawn us in with yet another polished single. “Envious”, which is out now, welcomes listeners to connect not only with a melody that will stay with them long after their first listen, but lyrics they’ve likely lived through or, perhaps, are right now.

Included on your writing team for “Envious” are folks that have also written for Carly Rae Jepsen, Jocelyn Alice & Tiësto, to name a few. Do you find it more of a challenge writing with a team as opposed to on your own or does it ease the process?

I love co-writing! Both for my own music and for other artists. A lot of the time when I’m writing by myself, I’ll immediately shoot down my own ideas and become hypercritical. That doesn’t really let me get far, because I’m too focused on “perfection” instead of just writing and trying new things. In a co-writing session, I can bounce ideas off of the other writers and trust their judgment as to whether or not a lyric or melody is cool. Some people have an issue with putting their ideas out there in a group setting, but I find it very freeing. You have to learn to let go of that fear of being judged and just share your thoughts, even if you think they might be terrible.

This new single as well as your previous release, “Bored”, has this fantastic upbeat dance groove, but also lyrics that will hit home for a lot of people. What comes first…the lyrics, the melody, or the beat?

Honestly, it depends on the writing session and who’s in it. For ‘Bored’, we didn’t have a track or anything. The entire song was written on a guitar and voice memo-ed so we didn’t forget how it went. ‘Envious’ on the other hand was a song I had started by myself on the guitar that was put to a track Ryan created, and altered lyrically and melodically to fit that. I personally don’t think there’s a right or wrong way to write a song, as long as you like it and are trying new things.

Music & performing have clearly been lifelong passions, considering you were 9 when you started performing! Was there a specific influence that got you started so early on?

I don’t know what originally drew me to music as a kid, but when I was really young (5-ish) I was super into opera, specifically the song ‘Ave Maria’ for some reason. At the same time, I really liked Hannah Montana and wanted to be her for a good couple of years. My dad listened to a lot of music around the house and in the car when I was little, ranging in anything from Harry Connick jr. to Billie Talent, and I think that played a big role in my current appreciation for a variety of genres.

Your YouTube channel is packed with some beautiful covers including songs from Billie Eilish, Justin Bieber, Metric & Lewis Capaldi, to name a few. How do you choose which tracks you’re going to cover?

I try to find songs that I think are interesting and would suit my voice. The popularity of a song can also play a role in whether or not I decide to cover it, but I don’t let that dictate all of my videos. I sometimes find it disingenuous when an artist’s page is full of only the most recent, chart-topping songs, and that isn’t really what I want to do. I also really enjoy covering songs that I’m inspired to make a fun video for! One of my favourites I’ve done is my cover of ‘Boyfriend’ by Selena Gomez. I spend sooooo long planning out, filming, and editing that video, but I loved every second of it.

I have an EP planned to release in mid-2021 that I’m super excited to share with everyone! I’ve gone through some personal changes recently and have been creating some really cool new stuff in the studio! I’m so happy with and proud of the music I’ve been creating recently, and I can’t wait to unleash it to the world!