Home / Promos / Fleece releases new single, “Do U Mind? (Leave The Light On)”

Fleece releases new single, “Do U Mind? (Leave The Light On)” 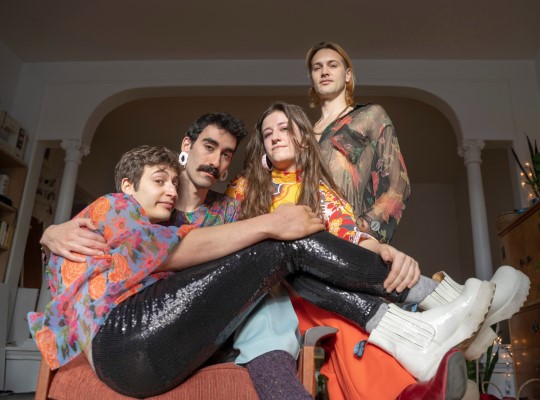 Montreal, QC-based quartet Fleece have released their new single, “Do U Mind? (Leave The Light On)“. The single is mixed by Adel Kazi (Clay and Friends), mastered by Ryan Morey (Arcade Fire/Yves Jarvis).

“Do U Mind? (Leave the Light On)” is about temporary love. A commentary on Grindr and hookup culture presented on a beautiful bed of reverb and indie-pop goodness. Discussing, songwriter/vocalist Matt Rogers stated,

“It’s about meeting up with someone and pretending like you’re in love for the night, even though you both know you’re not. It’s a little wink to all the people out there who feel the same way, and want to feel that sense of belonging for just a moment. I feel like hookup culture has made it really hard to be vulnerable with each-other. This song is my attempt at explaining the intersection of love, isolation, and frustration that apps like Grindr make me feel.”

“The video was directly inspired by Fleece’s symbiotic creative process,” added director Capriolo. “Four independently imaginative and goofy artists with completely different energies, that can come together and make magic. They each had a colour and a light fixture that represented their vibe, and by the end all their colours were mixing together in Fleece’s signature paisley-sixties way. The sets and instruments used in the ‘dream world’ were made of cardboard that the band and I crafted together to emphasize the band building their music from scratch.

In imagining the visual tone for ‘Do U Mind? (Leave the Light On)’, I wanted to highlight the song’s romantic portrayal of one-night stands and dating-app lovers. Taking what typically has had the connotation of being shameful or embarrassing, and then reimagining it as romantic, sensual, and fulfilling.”