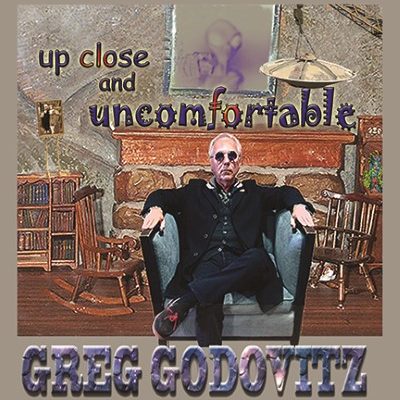 Legendary Canadian musician and author Greg Godovitz has released his new book, “Up Close And Uncomfortable”.

As a member of Fludd, Godovitz held eight Top 10 hits — including SOCAN Hall of Fame inductees with over 100,000+ airplays a-piece, “Cousin Mary,” “Brother and Me,” and “Turned 21.” As a member of Goddo, he released 11 albums while touring extensively; one such concert was front and centre for its 35th anniversary as a big-screen movie, The Return of the Pretty Bad Boys, in 2014. He’s been a member of The Backdoor Blues Band, The Pyggs, Sherman and Peabody, The Mushroom Castle, The Carpet Frogs, The Anger Brothers, and The Pretty Ones — “I started playing bass guitar in that band in 1964,” he says of the latter, “but I wasn’t very good — until I started practicing.”

He’s got a new group, The Greg Godovitz Coalition; he released a solo album, aMuseMe, in 2019 with Paul Dean (Loverboy) on production; he’s written well over 200 songs, but says “some of them stink,”; he had a weekly radio show, Rock Talk, where guests like Ray Manzarek (The Doors) would hang up on him because he was goofing on them; he’s met two Beatles, three Rolling Stones, two Kinks, and one Virgin Billionaire; he’s set his sights on preserving history, be it through resuscitating the notable iconic venue, the elMocambo, or creating the Toronto Sound Museum.

All this to say, in his 57+ years in the industry, Greg Godovitz has seen it all. And luckily for audiences, he’s thrilled to set his tall tally of tales free.

The first peek behind the curtain came in 2011 thanks to Godovitz’s autobiography, Travels With My Amp. An instant hit, the release went on to become a national best-seller with three printings.

While additional short stories appeared in the National Post and Toronto Sun, they did little to satiate his audience’s appetite for more.

“After the success of Travels With My Amp, people wrote in asking for more, so I started the process again,” he shares. “After one hundred pages of more insanity, I realized I was just repeating myself.

“This is why there’s no sequel to Travels; I decided on something different.”

While he notes Up Close And Uncomfortable is equally as funny, “it isn’t quite as disgusting as the first book…”

It’s stories “like sitting next to a shape-shifting Alien on a late-night flight,” he muses, adding that he was the recipient of an outer space implant in his brain as a result.

“Like submitting one of my much-requested recipes that only got the reader drunk if they followed my instructions. Like how I could get in the Last Will of Aunt Toni when I found out she had an original Van Gogh stashed in Geneva…

“Like meeting Ringo, or spending a night in jail for hiding a computer mouse, or starting my own radio show… Everyone who has read it says it’s very funny and, considering the current state of our world, that’s not a bad thing.”

Be sure to check out “Up Close And Uncomfortable” HERE, and find out more about Greg below, via our mini-interview.

Was a member of recording groups Fludd and Goddo

My books are both available at amazon kindle and www.Shopgreggodovitz.Com

Tell us about the writing process behind the book.

I started to write part two of Travels With My Amp which covered the years 1964-1984, but I found it was too similar, so I began writing

humorous short stories not related exclusively to the music business.  There are still music-related tales of course but the odd story of encountering aliens makes for a nice change.  I wrote the book in Calgary, Canmore, Dominican Republic, Muskoka, and Prince Edward County.  I find it easier to write in different settings.  Not as many distractions. Being humorous is one thing, writing it is quite another.  Many headaches getting it right.  Hemingway said, “Write drunk, edit sober.” I prefer, “Write drunk, edit hungover.” It seems to work for me.

Staying alive, healthy, and of reasonably sound mind. I also canceled certain American news channels so as not to see that orange President again.

Finish my next book   ‘The Idiots Trilogy…Part 4’, and have a crack at writing a comedic musical.

Is there anyone out there you’d like to collaborate with in the future? Artist or producer or…?

Famed record producer Eddie Kramer (Hendrix, Led Zep, Kiss, Stones, etc) and I are talking about a two-man evening of stories and song In small theatres across the country.