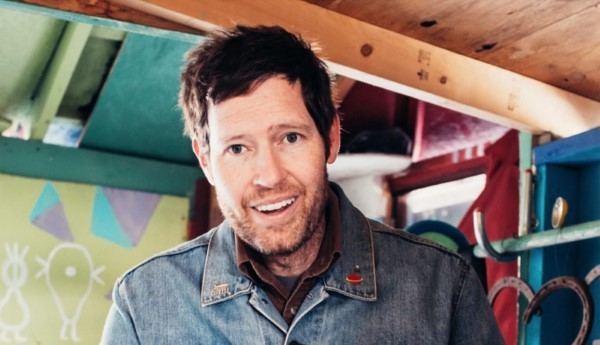 Chad VanGaalen has delivered a phenomenal new animated music video for “Samurai Sword,” the first single from VanGaalen’s upcoming album World’s Most Stressed Out Gardener. VanGaalen’s new album is set to be released on CD/LP/DSPsMarch 19, 2021 in Canada from Flemish Eye. The thirteen-track effort, which also features the tracks “Nightwaves,” “Starlight,” Where Is It All Going?,” and “Flute Peace” was written, performed, recorded, and mixed by VanGaalen at his Yoko Eno Studio in Calgary, Alberta, and mastered by Ryan Morey in Montreal, Quebec.

“I had just ripped a bunch of old leaking copper pipe out of my basement in a reno job that I jumped into willy nilly. Realizing how magical the pipes sounded, I put them on some dirty styrofoam and banged out the janky beat that introduces the song! Garbage is life. It just spilled out in a couple minutes. I didn’t try to stop it because I was smiling like I was just cruising through my neighbourhood. Simple like a sandbox. An ode to the simplicity. It’s hard to let things be simple. But simple is easy on the mind, and being jovial in song is something I find really difficult. Why? What?”

As for the “Samurai Sword” video, VanGaalen elaborates;

“I was drawing black and white plant backgrounds for this song because of the great old samurai movies of the past. I like how nature sometimes takes the lead. I was getting all knotted in my mind about the sky. I looked at my dad’s watercolor paintings of a sky, and felt like I couldn’t get the feel right. So, I just borrowed his sky for a scene and then I realized that my dad’s paintings were perfect and already full of real life energy. I used them to finish the video and felt like we got to go on this quest together. In my mind. Fuck time.”

The video for “Samurai Sword” gives viewers a peek into VanGaalen’s surrealistic world, expanding the 2:04 album version to a gloriously weird extended version with a 3:39 run time, and can now be viewed on YouTube. World’s Most Stressed Out Gardener is now available for preorder.