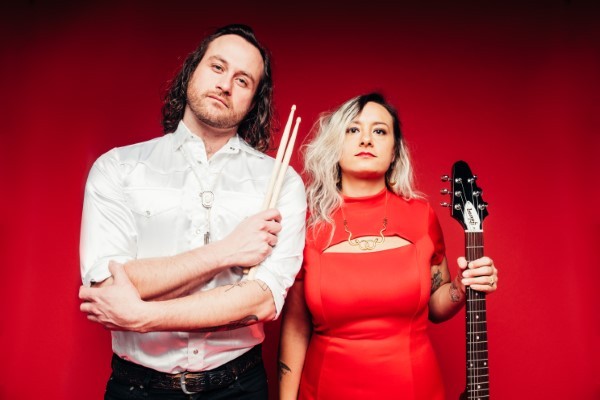 Calgary-based Miesha & The Spanks (guitarist Meisha Louie and drummer Sean Hamilton) have announced the release of Singles EP; a follow-up to their critically acclaimed 2018 LP Girls Girls Girls. The EP is set to drop on April 16th. The latest single, ‘Wanna Feel Good’, is only a sneak peek of what we can expect.

“Wanna Feel Good” is described as “a tiny bit psych, a little 90s grunge, some scrappy pink, [and] alt-rock.” According to Miesha Louie, this single was a last-minute add-on to the EP.

“It was just before what would be our last session [with Stagger] – or more importantly it was his last session in his hand-built studio, the Rebeltone Reach – before tearing it down and moving West. This song couldn’t have come from a more honest place, birthed in frustration and tension before finally a sweet release.”

The Singles EP is “a collection of songs influenced by the immediate life-changing effects of life during lockdown.” The duo worked with Leeroy Stagger, who took their tracks and “turned it up (way up) and imbued their crunchy mono-guitar sound with extra doses of fuzz and feedback, guaranteed to get the blood pumping.”

For those unfamiliar with Misha & The Spanks, they “offer a dynamic mixture of punk, garage, and hard rock embellished with straightforward lyrics, gritty production and hard hitting performances.” They are described as having “an energy that hits you in the face, throwing you into a world of killer riffs and sweaty gig venues.” With a pretty incredible history behind them so far, Meisha and The Sparks are sure to experience success with their latest endeavors. Be sure to check out their latest single, ‘Wanna feel Good’ and their latest EP, Singles EP, on April 16th. You won’t want to miss it!