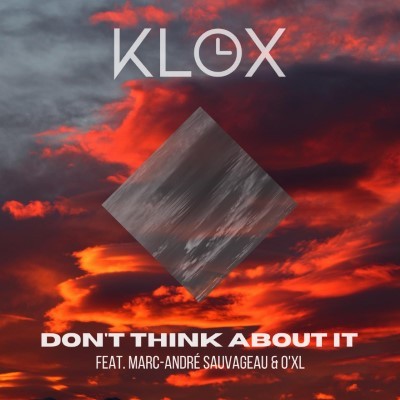 Klox has earned a solid reputation as a DJ and producer, and now the multitalented artist is quickly becoming one of Canadian music’s most promising newcomers. Teaming up with fellow artist Marc-André Sauvageau and DJ/producer O’XL, Klox has recently released the latest single “Don’t think about it.”The new song is available now on all streaming platforms, check it out here.

“Don’t think about it” was originally written by Sauvageau (who also performs the tracks lead vocals) and Thomas Branconnier. After sending a demo version of “Don’t think about it” to Klox, they both teamed up with O’XL to create the new dreamy dance/pop song. Sauvageau is known both for his strong song writing and performing skills. When it comes to writing “Don’t think about it” Sauvageau explains; “In a society where it’s so easy to swipe right, the song is about actually investing in a relationship and working through the small things. It is so easy to overthink love when we could just embrace the journey.”

Creating new music in 2020 wasn’t easy. The trio of artists (Klox, Sauvageau, and O’XL) worked remotely in their respective studios and remained productive throughout the tough year. “Don’t think about it” is a perfect example of dedicated artists teaming up together and enjoying making music while navigating through these strange social distancing times.

Klox says; “After releasing my last few singles, I felt I really needed to rebrand myself and find MY sound. I enjoy so many types of music I tend to get lost while writing, but “Don’t think about it” opened my mind to a new sound, which I’m embracing at the moment. The creative process just felt so natural and I think both O’XL and Marc-André Sauvageau (shout out to his amazing voice!) really made me step my game up.”

Klox didn’t rush the release of “Don’t think about it.” He wanted to wait for the right timing to do so. Klox decided to aim for a more “chill” sound in 2021, the young artist felt January was a good time to release this new piece of music.