Interview – What If Elephants 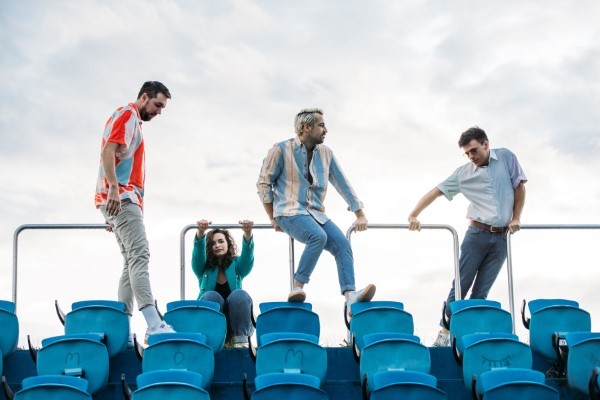 What if Elephants is kicking off 2021 with the release of the lead single “Sugar Daddy” off their upcoming EP, Relationship Status.

The four-piece indie pop band includes singer and guitarist Joey Langlois, vocalist and keyboardist Alanna Martin, drummer Justin Wiley, and newcomer bassist Collin Steinz. Produced by Walk Off The Earth’s Tokyo Speirs, “Sugar Daddy” is the perfect pop escape from the winter blues. Rhythmically driven with delightful harmonies from Maya Malkin, a long-time collaborator, the track is a testament to the divergent musical experiences that make up their musical backstories so fluidly.

In 2015, the band released their first EP “Getaway” and were finalists in CBC’s Searchlight competition with tracks like ‘Candles’ and ‘Middle Ground’. They were also finalists in RBC’s Canada Walk of Fame Emerging Musician Program in 2018 and have toured extensively on their own and with artists such as Milk & Bone, Port Cities, Monowhales, and Flara K.

We got to speak with the group to find out more about their history, the making of ​”Sugar Daddy”​, and what we can expect from their upcoming EP.

How did the band What if Elephants come to be?

In 2011, Justin and I (Joey) met while studying audio production in Montreal. We started playing some of my original songs together for my solo project just for fun. About a year later, Alanna and I met at a jazz bar while watching a mutual friend’s performance and we had our first jam together, interrupted by the Montreal police. Our founding bassist, Eric Letourneau found an ad I put up on Kijiji, and it was shortly after that we made the transition to a more collective approach of composing and called it What If Elephants. In late 2018, Eric went a different direction musically and left the project, but still occasionally joined for shows. Over that period, we got to know Collin, who we knew from playing shows with his other project, Flara K. We were already big fans of his vibe, undeniable coolness, and his chops, so it kind of felt like asking someone out on a first date in sixth grade, but we found the courage and he said yes, haha. Even before we were looking for a new bassist, Collin and Sam (lead singer, Flara K) had already grabbed a coffee with me just to let me know that they wanted to help us succeed any way they could, both being pro hustlers in the business. We couldn’t be happier about Collin joining.

Tell us about the making of the new single — ​”Sugar Daddy”​. How did this particular song become the first release of 2021?

I started writing it back in 2018, so it was the third song to be started for this EP. Technically, “ETA” is the first release from this EP, which was back in November 2019, but because of the pandemic, everything has been so delayed that it is kind of like rebooting the project. It was honestly just a matter of it being farthest along, and also it being the kind of track that felt like it needed a fun outdoor video to go along with it. Given how unpredictable things are these days, it just turned out to be what made sense.

How did Maya Malkin and Tokyo Speirs (Walk Off the Earth) get involved?

Maya and Tokyo have both been friends and collaborators of mine for years. Maya since moving to Montreal in 2011, and Tokyo and I met when I was around nine or ten years old in the Ottawa/Gatineau area. When I started this track, I felt like it had some potential, and one of the first people I fire those kinds of ideas at is Tokyo. He just gets what I’m going for. On this track he refined a few lines in the chorus to make it more coherent and phonetically pleasing. Once the song had a rough draft in place, I felt that the nature of the character in the second verse needed what I knew Maya could nail on the head with her interpretive ability. We were so stoked to have her on the track. I find that she really puts you in that character’s shoes and conveys all the emotion that someone in that situation would be experiencing.

What impact does the group hope “Sugar Daddy” will have on their audience at this time?

In a time where finances are so up in the air, along with everything else, we hope this song just reinforces how important it is to value the relationships you have with other people. A lot of time, financial stress can actually harm a relationship, and this song was written as my own reminder to adjust my perspective in that situation.

Since the release of the EP Getaway back in 2015 and the following single releases, what has the group learned about themselves that they’ve carried with them as they went into making the new EP?

I think we’ve learned more about how to work together. What each one’s strengths are, and what each person prefers to tackle in the grind that is being a band. My role was more producer-oriented, taking a bit more of a big picture approach to the sonic direction of the project, bringing together a lot of co-writers and collaborators to make it happen. Justin is our technical genius and master of all things rhythm. Beyond just the music, achieving a lot of the spectacle during our video and shows is thanks to Justin’s ability to DIY engineer basically anything – which will play a big role in promoting the EP! Alanna sang more on this EP than the last and we are stoked about that. No one sounds like Alanna, and we love it. She also plays the keys anywhere on the EP where it sounds complex in the least. I typically design the sounds and lay down anything a toddler could pick up in a day. Harmonies have also become a key ingredient for us and the sound we like. Collin joined in as this EP was well on its way and put his touch on a couple of tracks as songwriter and bassist. We can’t wait to make more music with him.

The group’s EP is entitled Relationship Status. How does “Sugar Daddy” fit in that space?

Relationship Status, being a collection of phases one might go through in a relationship; “Sugar Daddy” finds itself somewhere pretty far down the line. These individuals are living together, they’ve known better times, and they’re choosing to stick it out even while their own circumstances are negatively affected by the other person’s persistent financial struggle. It may sound like simple kindness, but it’s surprising what financial stress can do to people.

The group is composed of musicians with different musical history and experience. How did the group establish a sound that fit their overall vibe?

I think we’re still very much in the process of establishing a sound, and I’m not sure we’ll ever arrive. We have evolved since the beginning and it has been really fun to keep it fresh. I am the most songwriting driven person in the band, Justin and Alanna both come with a more in-depth theoretical and practical training which lends to richer harmonic and rhythmic structure, and Collin brings the grooves. We started off almost playing alternative rock, and these days we’re closer to pop music. I have definitely been making an intentional transition from rock to pop over the years, based on my own journey as a songwriter, but I think there’s just something not quite explainable that happens when we each contribute. We get a sound that none of us could have arrived at alone. That’s our vibe and our sound I guess. We’re friends, and we hope that comes through too!

When artists are able to tour again, will What if Elephants hit the road and debut their EP live?

As much as we can, yes. The future is certainly unclear concerning that. A lot of beloved venues have begun permanently closing their doors. We’ll see what’s left. Regardless, we will find a way to play live music together somehow. It was inspiring for us to watch Collin and Sam take their project, Flara K, across Canada during the pandemic in an R.V. virtual concert/interview tour. I think innovative thinking like that brings a lot of hope to a struggling industry at this time.

The group has participated in multiple Canadian incubators like RBC’s Canada Walk of Fame Emerging Musician Program in 2018 and CBC’s Searchlight competition. What does it mean for them to be artists in Canada’s music industry right now?

Canada is a big country. Typically, musicians made money selling tickets and merch on tour, and that was tough in Canada already. Now it will probably be harder. Many established bands still rely on grants to be profitable, and grants are actually a way that the government helps stimulate the economy. We are super fortunate to have landed the Juried Sound Recording grant from FACTOR just before this pandemic took hold. If you’re a musician that wants to perform as an artist in Canada, grants are extremely helpful and I would 100% recommend significant research and effort there. Beyond that, learning how to actually let your fans support you – in other words – monetizing your music/brand in alternative ways is important for longevity. And then as an artist or behind the scenes, more than ever I think diversification of streams of income is essential. That could be collaborating with more people (which for me is the most fun part anyway!), but also learning auxiliary services to offer fellow artists. I won’t expand beyond this because it’s such a huge topic.

What were the talks like going into the making of the new EP? Where did the group see the music going?

It seems that there’s a song we put out every once in a while where we discover an ingredient we’d like to try using more often. “Elastic Band,” our single from summer 2017 had that. When we started getting ready for this EP, we knew it would sound a bit more pop-influenced and that we wanted a lot of percussive rhythm for people to move to. We’re pretty happy that this EP has a generally fun vibe to it with just a couple dips into the deep end. I think people need fun right now.

What can fans expect from the new EP Relationship Status?

It’s a collection of indie-pop tracks talking about various phases of a relationship, with a light sprinkle of 80s vibes here and there. We feature four other artists whom we are big fans of, – Flara K, Bayla, Maya Malkin, Namelle – and you’ll find that their voices really elevate the songs they feature on.