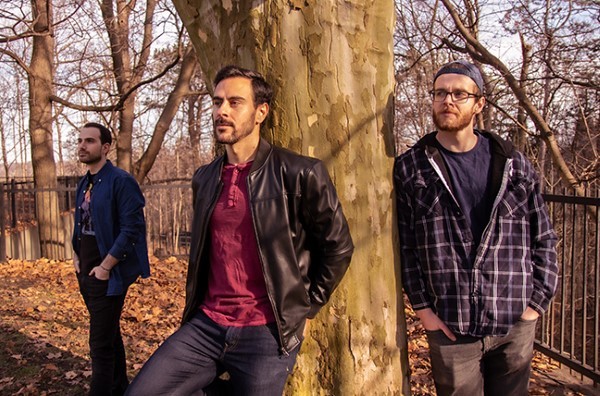 Toronto, ON-based three-piece rock band, Derev have released their newest single, “Futile”, which harness the intensity of metal with atmospheric progressive sounds, all while incorporating elements of their Arabic and Armenian heritage.

The brand new track features the guest vox of Adel Saflou (Ambrotype). The video whisks audiences on a vivid journey through the mind of an individual who is exhausted from a life lived glued to a screen and yearns to return to a more natural way of life.

“Contrary to what one might assume when seeing the music video, it’s not meant to illustrate or predict our future as this ‘doomsday,’” says Syrian drummer and songwriter Michel Karakach. “We’re not predicting the future or saying that our species is going to be dominated by machines or overtaken by this advanced artificial intelligence.”

“Rather, it’s about the present situation and how integrated we have become with this technology,” Armenian guitarist and songwriter Armando Bablanian adds. “We are so dependent on it that we hardly do any activity that does not involve us being behind a screen.”

Check out “Futile” below, and find out more about Derev via our mini-interview.

Armando: Greetings, we’re Derev, a progressive Rock/Metal band formed by Michel and me. We’ve been playing together for more than 10 years, but we never had the chance to pursue music as a career due to circumstances of living in the Middle East. When Michel immigrated to Canada from Syria a couple of years ago, we knew we had to give this project another shot. So we got our own place, combined our gear to create a make-shift home studio, and we began writing the material.

We then met Liam while we were auditioning bassists and we immediately sensed that he was the right guy for the job. He understood precisely what we were looking for and nailed everything we threw his way.

Tell us about the recording process behind ” Futile”.

Michel: “Futile” is actually the first song that we wrote together after Armando and I decided to pursue the project seriously. I had an idea of what the topic of the song would be and I had this simple tribal drum intro in my head that I showed him. We then began building up on that. And as we were writing the song and the lyrics, we started discussing the possibility of having an animated music video to deliver the message of the song visually as well.

Armando: The song was entirely recorded at home. It was first recorded as a demo in our home studio and it went through a couple of iterations and changes. Once we were satisfied with what we had, we started tracking the final version of the song. Michel tracked the drums on his electric kit, and then fine-tuned it to get his unique sound as much as possible while keeping everything sounding organic. I tracked the guitars with James, our mix and master engineer, and we recorded the bass with Liam. Once the instrumental version of the song was ready, we sent it to Adel in Amsterdam and he laid down the vocals. This is basically how all the tracks on the album are being recorded.

Michel: Even though 2020 was a dreadful year for a lot of people, musicians in particular, due to the whole COVID-19 situation and the cancellation of many live shows, it was a fruitful year for us. It allowed us to concentrate on the project and to dedicate a lot of our time spent at home to writing, experimenting, and perfecting the material. The bulk of our EP was completed in 2020. It also gave us enough time to find the right people who are now involved in this project.

So, I wouldn’t say there was a specific event of the year for us to highlight per se, but adapting to the circumstances and taking advantage of the negative situation is definitely an experience that we’ll take with us for years to come.

Liam: For us, 2021 is going to be an extremely busy building year. We’re releasing another single followed by our debut EP “Leap of Faith”. We’ve put the work into writing and producing an authentic, nuanced EP that we believe has the potential to make waves in the scene, but that’s just the start. Now we’re fully focused on making sure our music reaches everyone who would connect with and enjoy listening to it.

This is obviously more difficult without live performance opportunities; however, we know that live shows will come back, and everyone who’s been craving the live experience since roughly a year ago will be packing local venues when they do. Therefore, we’re ready to put on a killer performance as soon as venues re-open. In that sense, Covid has allowed us some incubation time; while our first live show will be much later in our trajectory as a band than we would have planned, we now have the time to craft it into something truly exciting.

Is there anyone out there you’d like to collaborate with in the future? Artist or producer or…?

Liam: Personally, it’s hard to think of artists I wouldn’t want to collaborate with. That being said, a huge part of rock music is the local community formed around up and coming bands. As such, I would love to see us work with some of the super talented acts coming out of southern Ontario like Pillars of Autumn, Cleopatrick, or Mandroid Echostar.

Michel: Exactly. Hearing Opeth’s Akerfield’s vocals on one of our songs or having a remixed version of one of our tracks by Steven Wilson, for instance, would be amazing to have. But our focus right now is on contributing with local artists and bands that would charge us with momentum to aim for bigger shows eventually.